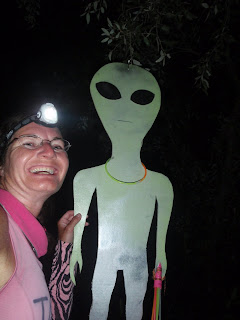 Little did I know there was the potential for aliens on the course. I had pepper spray for bears/cougars, I had snake proof gaiters for rattlesnakes, copperheads (do they have these in CA?) and a cape to make myself large for the puma's. But I had nothing for alien abduction...but in the future I will be prepared.
This was at the alien aid station which was filled with super nice and helpful volunteers (as with all the aid stations at Western States 100 miler). I am a little confused about what the alien was holding in it's hand but I believe it might have been the course marking ribbon. Or it could be a human probber. It's a tough call.
I do not believe I was abducted however, I think Iva and I might have seen a fox and/or a skunk. As I recall foxes do have a scent like a skunk and at the same time I smelled the skunk like odor is when I saw the fox like creature.

As we waited for the next runner to catch up for the ferry across the river I chatted with the volunteers. I re-thanked all the volunteers along the steep climb down yelling at the top of my lungs. Then I burst into song! It was time for “Row Row Your Boat!:” I may have changed the words a bit including the suggestion they should row row row the boat to Auburn! I was not above skipping the next 20 miles or so particularly since a lot was to be in the dark. And I love raft rides.

I may have made a spectacle of myself. But I was having so much fun and everyone was so WONDERFUL! And by this time I was no longer hearing the air horn creeping up behind me so I was starting to believe that I could make it to the finish assuming all went well.

As we waited patiently for the next runner his pacer joined us in the boat. It was my friend Jimmy Dean Freeman’s brother from the SoCal Coyotes. I knew Jimmy from JJ100 so it was cool to meet his brother. Finally his runner arrived. Sadly his runner did not appreciate the crossing as much as I did. And he looked a bit pukey. I tried to discretely move away because I think puking is contagious and on a boat you are kind of limited in how you can escape. In fact after finishing we learned he did puke pretty quickly after getting to the other side of the river.

The crossing went pretty quickly. Perhaps even faster as I started yelling, “Faster, Faster!” to encourage our rowers to get the lead out (or whatever the boating term for rushing is). They did row quickly and efficiently thus all too soon we were across and my brief stint at sitting was over. Because of potential puking guy, I scurried out pretty quickly. Somehow I was relieved of my life jacket (this I really have no recollection of) and I was being gently handed from the boat personnel to the land personal over a small jetty. And it was back to running/walking.

After a quick “Thank you” to the rafting volunteers and a really loud “THANK YOU” for the volunteers on the other side I was ready to head up the 1 + mile hill to Green Gate. What an AMAZING experience. In fact I would say it is the memory that may be a top 10 in my life.

As we passed the far Rucky Chucky aid station I grabbed a bite or two and a small glass of ginger ale to ward off sour stomach. Although I had a drop bag at this aid station, I did not make use of it but simply headed up to Green Gate which I was going to get a fresh pacer: Pacer Shane.

Hiking up to Green Gate I knew it was going to be a bit steep and long. But it was nothing compared to earlier in the day. And at the top I would get to see Shane and Tristan. This motivated me to keep moving forward with purpose. I was getting pretty excited and knew that I was feeling super strong and so happy. I had made it 78 miles and I was moving forward with purpose.

As Iva and I arrived at Green Gate I was impressed with the green gate decorated with christmas lights. It was really cool. But there was a problem. No Tristan or Shane. I ate and drank than moved along a bit alarmed. I told Iva I could keep running by myself because by this time she was fatigued and her legs were starting to bother her. She had committed to 25 miles and had made it that far so I was happy. I knew the sun would be rising moderately soon. And I have dropped pacers before and although a bit of a bummer I figured I could keep moving forward alone. This anxiety was soon lifted when we rounded the final hill and there was Tristan and Shane as well as other pacers and pacers. Unfortunately the volunteers were not letting them go to the aid station and the aid station volunteers were not communicating this information to runners, which was very disconcerting.