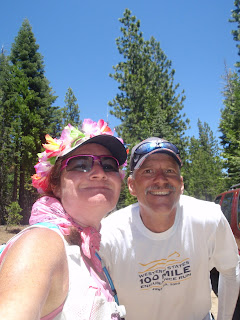 With one of my ultra-running hero's: Tim Twietmeyer.

Tim is really nice and so encouraging to all. I met him first at the California International Marathon in December. Then I met him a second time at the WS100 mile lottery the next day (where I may or may not have made a spectacle of myself). Then I saw him at the WS100 training runs and throughout the race weekend.

Although he has won the race numerous times, run it even more times he is really down to earth, friendly and a genuinely great person (as so many affiliated with the WS100 race are!)

Very quickly I arrive at the next aid station. In fact for a bit I feel like every hour or so I am arriving in aid stations which is good, but also means they kind of blend together in my mind. The aid station volunteers take really great care of me. I resupply my beverages and refill my bandana ice burritos. I am feeling really good and my race continues to go very well.

This section we have a 4 mile out and back loop then we will be rejoining the original course. This is exciting to me because I am vaguely familiar with the original course through reading and studying blogs and course descriptions. In fact Craig Thornley is definitely a WS100 icon and I tried very hard to memorize his descriptions of each section. Sadly this was of limited use until Millers Defeat!

Heading out of the aid station I am alone again. This is okay until I run by a fairly new DEER CARCASS!!!! Seriously, I have read others blogs, race reports and course information and no one mentions this. I seriously nearly end up walking (actually running back) to the aid station I just left. But I give myself another pep talk. And by the time I realize it is a deer carcass I am pretty close to passing it. My contacts really do not work very well which is kind of a good thing when you are about to see something horrifying! As I pass I actually have the sense to take a picture but it is from behind and I am moving pretty quickly. In my other hand I have my pepper spray out and unlocked! I am ready to take on any beast that might be about to supplement it’s deer meal with a person dessert! But I was not going down without a fight…or without seasoning myself:-)

This section was more fire road so I was able to run with a bit of speed. I ran with Antoinnette for a little bit. She was very festive with her rabbit ears and was moving along solidly. Sadly as was the case throughout the day my pace did not match hers as I moved along.

At the end of this loop the RD suggested we would travel the “roughest” section of the race. This actually is too kind a definition of what we ran through. I was really glad for my snake proof gaiters as I scampered over tree’s and branches. I know the RD and the volunteers had to work really hard considering the issues with the course and they are to be commended! But I still struggled here. I was extra cautious because I did not want to fall. Then the final section of this “rough section” was a snow slope which I nearly took a header. Alas at the last second I was able to regain my balance as I slammed into the jeep road at the bottom.

The jeep road return to Millers Defeat kept having small snow sections of a few hundred meters followed by dirt. I was glad to be getting to the end of the snow pack but found this almost harder than the original snow because at each of the section breaks you had to cautiously get on or off the snow. Or at least I should say I had to…others seem to run recklessly through the snow but I tend to be very hesitant and really did not want to mangle myself.

Heading into Millers Defeat I was very excited. I was about to get back on the WS100 course. And reportedly there was no more snow. WAHOO!!!