The ups and down of my day: with a nice run to finish 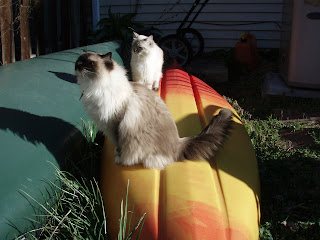 Today Tristan drove me to work. It was my first day in my new office. It did not go well, although by the time I jogged home it seemed to have settled down a bit.
My first tragedy was that my computer had no internet/e-mail accessibility. The techs were on call as early as 6:30 a.m. and actually after I had spent 30 minutes putzing around trying to figure out the problem they came to my office within a few moments of my call and had solved my problem in less than a minute (bad connector).
Initially I thought my phone worked (the speaker phone did when I called tech support), but later in the day I did not have a dialtone. But this did not stop me from trying to make outgoing calls now and again. I learned that while I had no dial tone or sound I was apparently capable of making outging calls and was prank calling Tristan, my husband now and again (well at least I was sucking others down into my lack of productivity!)
After a few minutes in the office I realized half the desk in my new room was not mine (the chinese characters taped to the top were a slight clue). It took nearly the whole day to straighten out the mystery of the missing desk pieces. Somehow my desk pieces lost their tag and were abandoned on my old floor (but a different room). At the end of the day it was located. I'm not sure the resolution of my missing pieces of furniture but both items were really close to my room when I ran away from the office.
Because I did not want to have another running in the dark incident (which turned into a bus ride) I just left and hoped for the best. My jog home was pretty uneventful which was good because I was a bit worried about having some disaster just to continue my day.
Posted by Runner Tammy at 5:26 PM

Labels: My office move--at least it's over:-)