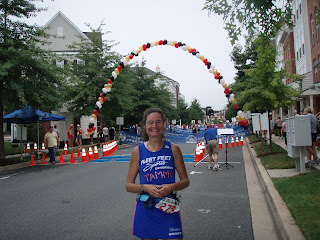 At the starting line (prior to race) 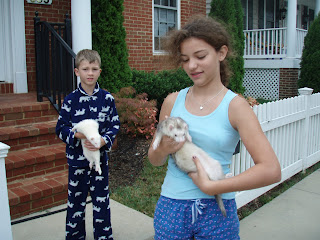 Cheering Ferrets (it's not every day you see Ferrets along a course!) 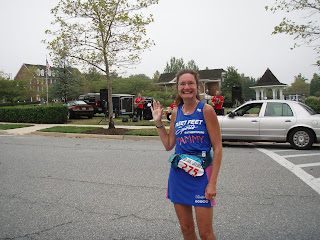 Enjoying a band along the course 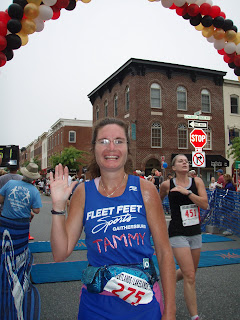 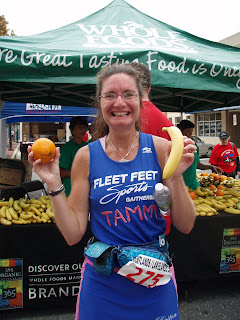 With some post race fruit (which I did not eat, I am amazed that folks eat oranges after races...and I was only up for a half a banana) But I have a co-worker who has been questioning my diet (and criticizing my LOVE for Diet Mtn Dew, so Ann, my co-worker is going to show this staged picture to illustrate that I have a perfectly healthy diet;-)
This morning my husband left for Seattle at 5 a.m. He is going to do a 6 day mountaineering expedition on Mt Baker then to climb Mt. St. Helens. When he left I started my jog to the Kentlands 5 km race. I took the long way so it was about 10 miles when I arrived at the start line (which is less than 1 mile from our house!).

My performance was pretty good. And although the course was a bit hilly I came in 442 out of 1181 runners, 25 out of 109 in my age/gender category, my gun time was 31:37 and my chip time was 27:01 (thus my pace was 8:42). It was a shockingly fast run on my part! I think it was a pretty good speedwork. Although at the finish I felt a bit nauseous (maybe a function of the speed). Or it could be that this was influenced by consuming 2 donuts and an egg McMuffin during my 10 mile run to the race. Then my friend Ann came to cheer me on and brought chocolate chip cookies, which I partook in.

After the race I ran home and did a little work. I am swamped at work and need to catch up before I go to two conferences in later September.

Completing several tasks successfully I decided to head to the pool to swim a bit. Since the pool is close to the library I first went there to pick up a few books. While doing this I noticed the Rockville Town Center was having a Jazz Fest. I grabbed a bite to eat, sat down and appreciated the music a bit. Then I swam for a while and enjoyed a very pleasant day.

Returning home, it was time to continue some work (in addition to some regular review work, I have to get prepared for my conferences later this fall). I will publish some pictures later but my network connection is a bit slow now.
Posted by Runner Tammy at 5:34 PM