Today I ran the FDA White Oak Classic 5 km race. Typically my performance in this race is nothing short of abysmal.

But today something clicked and I had a decent race. My husband speculates it was the "oxygen rich" Maryland air. Although I think it might have been the fact I keep having running friends who suggest in order to speed up my times for the marathon, 50 km, 50 miler and 100 miler I need to actually do some speed work. 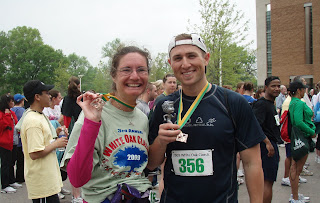 With my friend Bobby G. from Virginia Happy Trails Running Club (VHRTC). Bobby came in 3rd place overall male. I on the other hand finished 3rd in my age/gender category. We both recieved the same medal but he also won a bobble-head and a bottle of motor oil. 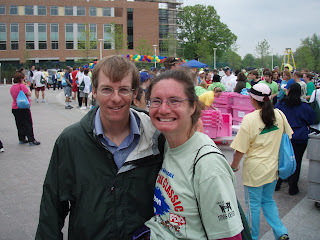 With my "crew" Tristan who kind of again failed at crewing...this may have been influenced by my prediction of 27 minutes (because I was going to run my heart out), but regardless of my ability to run a consistent pattern, he should have been at the finish line cheering everyone on. 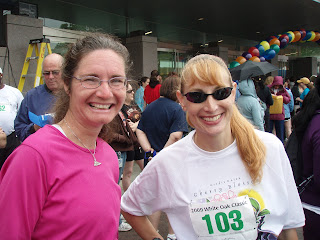 With my friend Angela from CVM. I have run many races with Angela including Marine Corps Marathon...she is my running mentor and gave me lots of great advice when I was getting into marathoning. 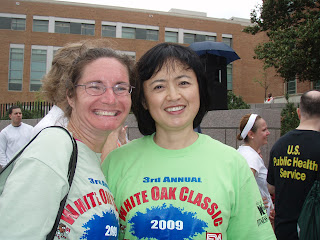 With my friend Feng. Several months ago when I was doing hill training at Sugarloaf Mtn, Feng is the young lady Gilligan and I ran into. She has volunteered at the White Oak Classic every year and does a GREAT job with the other volunteers passing out water. 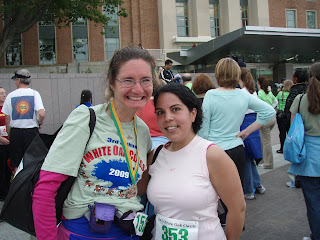 With my friend Val. Several years ago, I ran a bit of the Rockville Twilighter with Val (we ran with my friend Ann who is going to VT City Marathon with me). In fact we ran into Val as she was running opposite the runners trying to catch up with us like a Salmon! She is so sweet.


At one point along the course someone suggested to me and a young lady close by that we were 11th and 12th place female. Of course I thought this spectator was joking. In fact considering many of us in the FDA are in our 30's-50's and females may be slightly more represented I was going to be pleased with a top 30th (age/gender) placement and a placement of about 150.
During the race I was shocked to see one of my Virginia Happy Trails Running friends: Bobby G. running through the woods at White Oak. It truly is a small world...and I guess we now both know where the other person works:-) Bobbie placed 3rd male/person OVERALL which was super impressive!!! So he has speed and endurance.
Next year based on this performance I will be a seeded runner for the first time in my life...maybe I can break 24 minutes (or perhaps 23 minutes, particularly if the race is further from Umstead 100 or the Cherry Creek Sneak 5 miler:-)
Posted by Runner Tammy at 2:17 PM

WOW 24.10 Great job!!! My average if I train my heart out is 23.30, I am just not a fast short distance runner. I'm sure you will break 24 soon.
So sorry to hear about your mother. How frustrating and difficult it must be for you. Hoepfully something good will happen and her issues will resolve.

I am seeing the North Jersey ortho next week...so I am hoping he'll have a clue or at least will care more than my present doc.

BTW I tried to subscribe to your blog (is that the same as "blogs you follow"?) and couldn't. I am still blog challenged!

24.10?? Smokin fast!!!
What on earth did you do with the rest of the day? Congrats on a great time in a real short race!

Gotta agree with Kim, sister - you were SMOKIN"!

Congrats on the PR!

You scare me just a little bit, sister!

You are super fast! I am glad you have an appointment with Dr. Owens, he is really good and definitely will appreciate you goal to resume/continue running.

Thank you also for the kind words about my mom. With several of my medical officer friends from work and grad school, I am finally able to at least converse with my mom's doctor's.

Sadly I am not positive about subscribing but think there is an icon that says: "subscribe to a life on the run". Then it will go to the reader of your preference.

Thanks! After my race I had to resume my work at the FDA. The swine flu has now everyone working super hard. I am keeping my fingers crossed this influenza strain is pretty mild but I do worry about a pandemic at some point.

Thanks...but I also forgot to mention that this race is held on an old Naval Munitions and Warfare facility (which is now owned by the FDA). This site may or may not have unspent munitions and barrels of mystery 50 gallon drums...nothing gets me going faster than fear, which should also explain my burst of speed:-)

My husband works at this facility and so far has survived (although his ability to follow directions such as those I give to help crew for me at ultra's is a bit questionable).

Hi Tammie. I didn't see you at the white oak race, but glad to see that you ran in it. I guess you didn't hang around long before or afterwards out of fear of what was in those "mystery 50 gallon drums". haha. John Lawrence.

It was great running into you (no pun intended) at a non-VHTRC event! And of course, it's always great to get paid to run! Congrats again on the 3rd place age group finish, and thanks for the kind words in the blog. I had a great time out there, and definitely surprised myself with my 3rd overall finish... but I still prefer using my endurance over my speed!

Mysterious 50 gallon drums are never a positive at a facility. Throw in that it used to be a Naval Warfare Research Facility and it is quite frightening!

But alas these negative thoughts really helped to get (and keep) some pep in my step throughout the race:-)

It was a real treat to see you on Friday. I never realized you were a co-worker. Your blog alluding to where you work is so mysterious...kind of like the 50 gallon drums at White Oak, so you should fit right in when your group moves!

You are right, it is great to get paid to run. Maybe in my next race that involves an application (Badwater comes to mind) I will suggest I am an elite athlete or at least sponsored. I never thought about the fact that we were being paid to run this race, but it is a good point.