Please Keep My Mom in your thoughts: She's in the ICU

My mom has been in the hospital for over 2.5 weeks. Prior to this she was in the hospital for a bit of time in Febuary. Several years ago she had a stroke and recovered well enough to be functional. But in February she had a moderately significant event and was quite confused and seems to have been struggling to become functional again. Then while I was in Denver she took a turn for the worse (unbeknownst to me thanks to a protective older sister) and was hospitalized. Now her prognosis is not good. 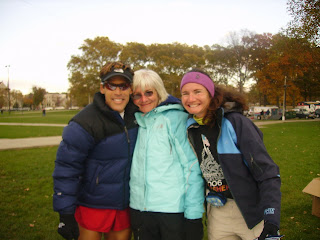 With my mom and Dean K. (one of both of our hero's--he is so nice, encouraging and down to earth!) during his 50 marathons in 50 days. I ran the Delaware Marathon with Dean and my mom volunteered during that race...it was a great race for her to volunteer because she got to see runners over and over...and since it was right after her initial stroke I got to see her every hour or two. 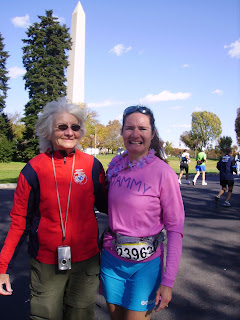 With my mom during the Marine Corps Marathon. She has seen me run this marathon many times (even the year of her stroke when she was out of the hospital less than 1 week). She is tough! 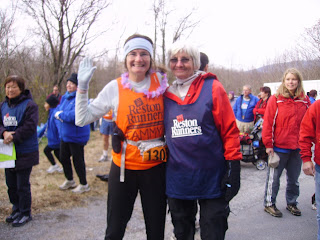 With my mom during JFK 50 miler. Again this was just about 1 month after her stroke, but with another friend of mine, she was able to crew for me. She has always been there for me during my running events. 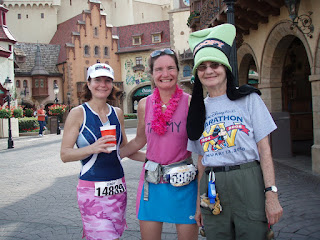 At the Disney Marathon with my sister and Mom. We are a goofy lot...my sister is drinking a beer, my mom is sporting the goofy hat and I am hanging out with them!!
My mom always enjoys going to races to meet people, watch runners and feel the energy. While she does not run, she always was happy to volunteer and cheer on everyone. 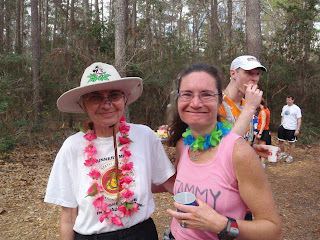 With my mom at Rocky Raccoon this past Feb. It was so nice to see her and hang out briefly before and after the race. I impulsively decided to run this race since she was in Texas, the race got lots of praise and I knew during the race I would have 3 laps (with several places) to see her. I broke my previous 50 mile time by over an hour and she was so excited for me.

This past week she did hear of my ~4 hour marathon at Frederick and I think she was really excited/proud.

About 2.5 weeks ago my mom declined rapidly and went to the hospital because she started having seizures and at one point was obtunded (essentially asleep and unresponsive). During the beginning of this episode I was in Denver and big my sister protected me from a situation in which I could do nothing. Now because this episode has been sort of improving and declining since February it is hard to figure out what if anything I could do in Texas that I can or cannot do in Maryland (and my worst fear would be to be in flight when something catastrophic happened).
Over the course of last week she improved a bit but continued to sporadically incoherant, seemed to be hallucinating a bit and was still quite confused about the reality we are all supposed to be in. Earlier this week she was stablized and we were starting to consider nursing home/rehabilitation options. That was until this morning.
The doctor called me about 7 a.m. at work and indicated she had taken a dramatic turn for the worse and is now essentially unresponsive and was moved to the ICU. A CT scan revealed another hemaerhagic stroke.
This was the worst conversation of my adult life.
She is now somewhat stabilized (as the Dr's put it they cannot predict if she has minutes, hours, days, weeks, years or decades left of life). But because I have medical power of attorney I was queried for some potential end of life decisions. I know my mom has always been clear about wanting a DNR (Do Not Resucitate), but this is something that is hard to consider. But I stated her wishes. I also clearly stated that if something happened to my mom that she would want her organs harvested or her body used for science (well, the warranty would be up...so what else could you do with it??). I also suggested I imagine my mom is already thinking of haunting me for this stint in the hospital because I think she would much rather be outside hiking, visiting a park, chatting with people rather then stuck in a hospital room. But this was a very painful conversation.
I hope that she is strong and pulls through this. In the meantime I would be really grateful if you sent some positive wishes (or prayers) her way in case she can feel these.
Posted by Runner Tammy at 3:35 PM

Labels: Thoughts and Prayers for my mom.

O, sister, i just saw this and my heart breaks for you, but I am keeping the good thought for you and your Mom!

I had a similar situation to this with my own older sister (one of 4 older sisters) and it is just more than any person should be forced to endure.

Your mother is in my thoughts, sister, and so are you - rest assured of that, at least.

I am so sorry to hear this. You, Tristan, and your Mom are in our thoughts and prayers. Let me know if you need anything.

Thank you for your kind words...I am very lucky to have a pair of really great parents. While they may have made all sorts of mistakes raising me (and yet they had a perfectly good trial run with my older sister), I love them lots.

Thank you. I know my mom was disappointed to not meet you in person at Rocky Raccoon. But alas you were flying during that race and I imagine she unknowingly saw you:-)

You remind me alot of her. So sweet, encouraging, kindhearted and just a wonderful person. Of course you both have teaching and coaching youngsters in common and in fact she was my Jr. High track coach.

Sorry to read of this Tammy - plenty of positive vibes will be sent out to you and your mom from NC.

Prayers and happy thoughts for both you and your mom.

Tammy --I just logged on to your blog to see what you have been up to and saw the news of your mom's illness and see that she is not doing well. I absolutely loved all the photos that you posted of her supporting you at races --you very much look like her as well (a compliment)...your mother and your family are in m thoughts and prayers --you are truly lucky to have such a great mom!!!