Frederick Marathon During the Rain: Mile 7 to Finish 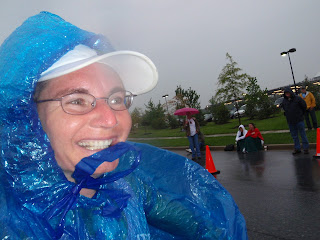 Even though I am taking the picture, I don't even attempt to make eye contact with the camera. And this is only about 3 miles into the rain. Little did I know I had 16 more miles of rain to go!

Oh yeah, and doesn't appearing to eat the poncho tie just add to the character of this picture??? 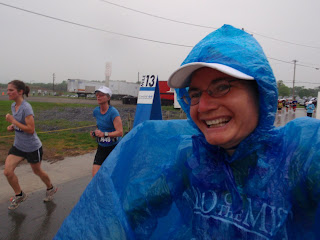 On the outside I am smiling but on the inside I am enraged!!! But this gives a clearer picturer of my "Maid of the Mist" poncho, which got positive comments (I think I could have earned some serious $$ selling it and sneers from other "serious" runners). I think I am part cat because I really hate being rained on--in fact as the race progressed and I got colder and wetter, I regretted not taking and wearing my gortex jacket, pants, hat and sealskinz waterproof socks. But alas my Maid of the Mist Poncho worked reasonable well for a few miles and I definitely was a bit dryer and more protected than most of the runners (I think there was 1 other relay runner and one other marathoner I observed with a poncho). 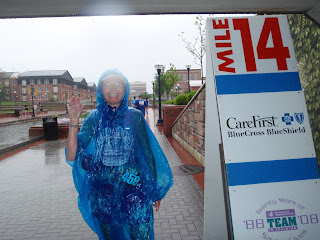 You can notice this picture is taken under the a bridge. The gentleman who took it struggled with my camera and was apologetic when I leaped at him during this photo (because I did not want him to change settings not because I was in a hurry...I was under a bridge so there was no rain:-). My camera is really finicky and has about 15 different buttons that can be pressed in a variety of configurations. But I have no idea what any of them do except the de-giggler (it lets me take decent pictures while moving) and the forced flash. Occasionally people mess with me and my camera which actually creates some problems because I have no idea how to reset my camera back to the default! 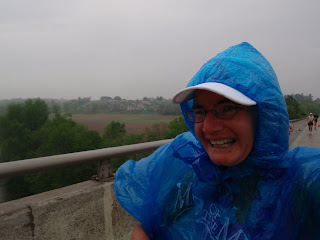 Crossing the Monocacy River about mile 17. At this point I did not even attempt to smile or act happy. This was a REALLY long uphill on the out section and seemed to be only a small decline on the way back. And for some reason both ways on this section the wind was at runners face. What's up with that??? 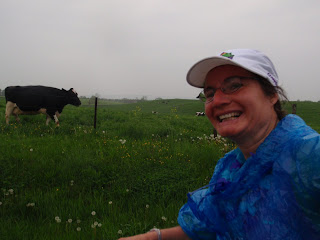 For just a few minutes by mile 24 the rain slowed a bit. I decided to try to get a better picture of me with a cow. But in my goal of having a decent picture, I forgot to take off my hat which might have made for a better picture or might have exposed a terrible case of hat head (which by the way in addition to a strong dislike of rain, I also hate wearing hats...but the only way to prevent my glasses from getting too foggy/murky I had to wear my old Frederick Marathon hat). When getting ready in the morning I thought about wearing my contacts but decided the 10-15 minute challenge of putting them in was just too much.


My experience at the Frederick Marathon this year was fine until the rains arrived between mile 7 and 8. The first few miles it was relatively warm and dry. But about mile 7/8 (between 7 and 8 not 7/8ths!) a few droplets fell on my head (and other runners). Initially the runners were a bit confused about the liquid falling on our head. When the rain first started I was in a chatty group that had a few people asking if it was raining or if someone was spitting. Someone fessed up to spitting which led to a few groans.

But soon it was apparent the rain had arrived. And within a few moments of the first few drops, a pretty steady and heavy rain started. Throughout the rest of the race, the rain was moderately hard with sporadic torrential downpours. I was glad I had chosen to bring my poncho and was also happy that I had grabbed a baseball cap. The combination of hat and poncho kept the rain off my head and away from my glasses for the most part. Or perhaps I should quantify this to say this combination was better than 99.99% of the other runners strategies because in reality even with my well in advance planning last June when partaking in the Maid of the Mist boat tour in Niagara Falls Canada, I still ended up pretty wet and my glasses did need to be wiped (unsuccessfully) numerous times throughout the course.

Throughout the race I was moving pretty quickly. I really wanted to beat the rain. But when that became clearly impossible, I decided I wanted to get out of the rain as fast as I could. As I moved quicker and quicker I eventually caught up to the 4:15 pace group. These runners were alot of fun and included several of my friends from JFK 50. In fact as I joined and then drifted on ahead of this group I heard the words "Remember VT100". This was a pretty surreal experience because I was wondering a) why "god" had a male voice b) how it was that VT100 was being brought up during this challenging race and c) if this bodes well or poorly for VT100. At last I realized it was some of my faster friends from JFK50 who I was catching up to in my quest for the finish line sooner rather than later (sorry in my rain/water induced confusion I have no idea of my friends names...can people start wearing their names on their shirts please!!!).
As I ran with my friends and the 4:15 pace group I chatted briefly with one of the pace leaders. Of course I come from the lazy school of running so my first question was, "I have never been this fast in a marathon before but I am curious, does the 4:15 pace group use walk breaks?" Well, I learned that they do not. In fact I think a bunch of the runners and pacers were laughing at my question. In fact and I am quoting directly here the pace leader exclaimed: "No, we do not take walk breaks, we in fact charge $20 for walk breaks". Eek, this was not good. This is a tough crowd. The kind my parents warned me about. But I was game, so I clarified, "Do you charge a one time fee of $20 or do you have to pay $20 per walking incident". Apparently it was per "incident". Of course I needed more information so I asked, "Do they take credit card or could I run up a tab and pay after the race?". Apparently it is a cash based operation (racket I would say) that must be paid up front. As this conversation continued a runner in this pack split off and headed to a safeway or walmart we passed. I commented to the pace leader, "That's going to cost her a bundle isn't it?" and continued with, "but it would be so worth it to have running water with a toilet, a starbucks and perhaps some yummy treats".

I love the report Tammy.

Wet and warm - I can just about handle. Cold and dry, yeah, I can manage that. Cold and wet, that's just evil.

Who needs Goretex when you have trash bags and a Maid of the Mist poncho?

Congratulations on the PR. I'm sensing a sub-4hr in the not too distant future :)

Congrats on a great race! I don't know how you could run with your glasses in the rain . . . that would have made me crazy. I probably would have ditched them and ran the rest of the way blind.

Hey! Professional statistician! You might want to check your math here:

Man, good on you for staying at the end and cheering on your fellow runners in that freezing rain. I wouldn't have done it!

That whole $20-per-walk-break thing is exactly why I could never be a "serious" runner. (Well ... that and because I'm slow.) Because that just seemed needlessly d*ckish, if you ask me, and I'm always kinda surprised when constitutionally d*ckish-type runners go outta their way to pat themselves on the back about how "accepting" of others runners in the aggregate are. Possibly they ARE ... in the aggregate, d*ckish runner - but you're still a dick!

Last but not least ... Man, sister, I thought my posts were long!

I was wondering why you were trying to eat the tie of a Glad Bag.
Don't they have aid stations?

Anything Glaven is being or doing can be described as "dickish."

I sense a sub-4 hour in my future if I could just focus a little. In fact I forgot to mention my few minutes cowering in the porta potty in the second half of the the race....hey it was STINKY but it was DRY!!!

I considered abandoning the glasses but I am so blind that I would probably still be wandering aimlessly through Frederick, MD...or perhaps I would be in PA, NY or even in Canada. Luckily I am always prepared for a trip to Canada with some Canadian money in case this ever happens:-)

I don't critique your questionable use of footnotes, italics and irrational use of crazy literature terms you use as a research librarian. How can you challenge my math??? Oh yeah because my math stinks! Well, I'm a statistician, in reality it just means I have to be reasonable close within some random (or fixed) margin of error. Would you prefer I say the clock: 11:33, my watch 11:39 hence 9 minute difference +/- 3 minutes??? Now you made me actually have to do some math. I need a beer and a nap!

Oh yeah as for your long posts...yours are way longer, they just look shorter because you use footnotes which simply makes the font smaller!

Considering how everything was sopping wet and tasted like cardboard or road pizza by the middle of the marathon, I might as well have munched on my poncho. It would have been just as tasty and palatable.

RE: Glaven...his poor attitude is probably due to lack of endorphins. I bet if he got a marathon under his belt he would have a way sunnier personality:-)