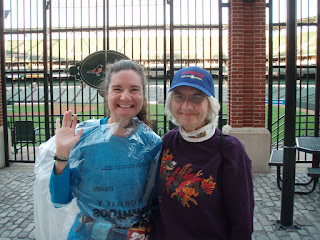 With my mom at the start. We had "mother/ daughter" weekend at Baltimore including walking around the Inner Harbor, a trip to the Art Museum and eating seafood at the Inner Harbor 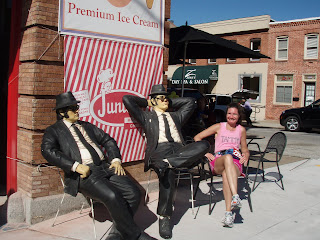 Taking a moment to hang out and relax for a moment...I think these are supposed to be the Blues Brothers. This section of the race being run through little Italy, which smelled really good: like fresh baked bread, Yum! 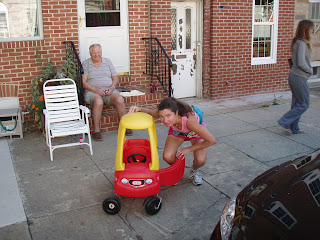 Hmm...stealing this car seemed like a good time at the moment, until I tried to get in! Well, I guess I had committed to running 26.2 miles not Grand Theft Auto! 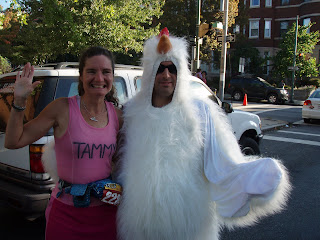 With the Chicken man... 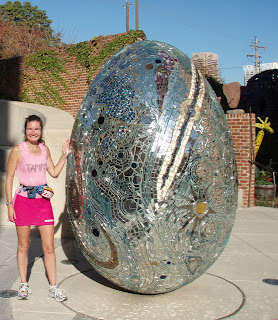 The glittery egg by the museum of modern art (is this where my sparkely fanny pack was born??)
The Art Museum is very cute, in fact at mile 14 (where it is located along the course) I chatted briefly with one of the runners because it was a really cute place to run by and a runner gave me the inside scoop, she said I had to go inside just to the Museum Gift Shop...I did after the race with my mom and it did not dissappoint, so if you go to Baltimore definitely put this on your list of Must Do Activities!)
The Baltimore Marathon was very nice. The course was very pretty, the spectators along the side very nice and the historic sites the course passed very inspirational (all of you should remember Fort McHenry of Star Spangled Banner fame).
I ran this race in ~5:20. Sadly my chip did not read so while my suspicion is that it was in fact about 5:19, I will never know; this is a bummer. Initially I had a great deal of trouble with the "strip chip", that was exacerbated by me retying my shoes several times (as my husband has mentioned during our runs, if shoe tying was an olympic sport I would win for quantity during any event). Ultimately I had to reassemble my chip so that it would stick but apparently must have bent the tiny antenae.
My other issue occured at about mile 18 and 20 when the aid station ran out of Gatorade (~18) and the next aid station ran out of water (~20). This brought back bad memories of Disney (no water/beverage for about 8 miles) and Charlottesville (no beverage for the first 10 miles). Each of these events were hot days and as a runner it becomes quite concerning because you don't know when the next fully stocked beverage station. I carry water in my fanny pack but I do not always have it full. The positive of Baltimore is that we were going through neighborhoods with houses and stores so I would have been able (and ultimately willing) to approach someone for help. I noticed my faster friends did not have this problem; however, it seems that it should not be a problem at all particularly since this race has been closed to entry for the past several days so they knew 18,000 of us would be competing in the various events. Out of nearly 50 marathons less than 4 have had beverage issues for me (a runner well ahead of the SAG vehicle).
It was great to see all my friends during this race and because the crowds had thinned to about 200 people in the 5:20-6:00 hour pace group I was sort of running with at times, I was able to meet lots of nice people and was never alone. Because of my picture taking I end up being with various pace groups depending on the number of photo opportunities (as well as bathroom breaks, treat breaks and sightseeing forays off course:-) The course, while hilly, was nothing compared to New Hampshire (or Adirondack now that I think about it). It definitely had hills but I think the clear statements throughout brochures made it clear that this was not a flat course (I think I would suggest they managed our expectations).
And the weather during the race was very nice. Because in my running it is all about my camera, I liked that the day was sunny and bright (my camera does not like clouds, rains or fog). Also by being warm, I did not have to decide if I should take a picture or have warm hands (a problem I faced in the Adirondack Marathon). So I really enjoyed my 26 miles running through Baltimore (and at least 2 extra miles wandering the course aimlessly after I finished).
It is a beautiful city with lots of sights. There were a few sections that were a bit sketchy but I think it gives runners a realistic perspective of the city and provides an appreciation of the sections that are so beautiful. Also, several sections clearly were working on revitalization and hopefully showcasing these portions gives the residents pride their obvious hard work in these efforts.
Posted by Runner Tammy at 5:48 PM

nice write up as usual -love the big sparkly egg and big white chicken!! Mother-daughter weekends are great..
glad you had fun during the marathon.