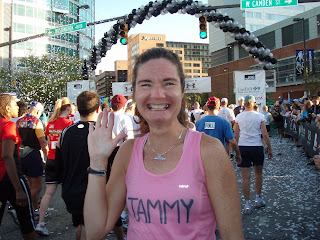 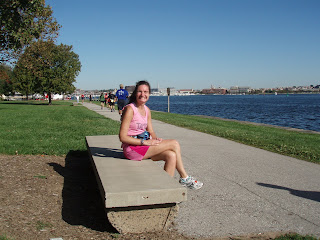 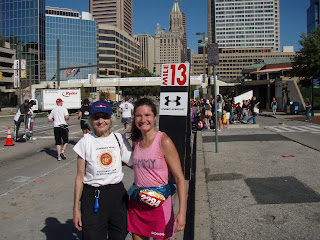 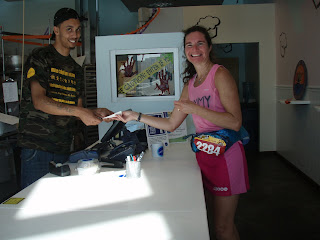 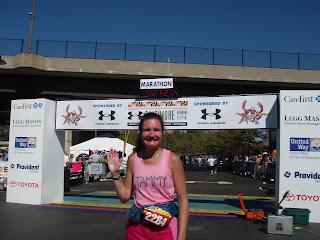 At the finish in a time of 5:20, which considering all my pit stops is pretty respectable, right?
This weekend I saw and caught up with many running friends from relatively recent races (less than 6 months ago) as well as runners I have know nearly 4 years.

At the start I ran into some friends I met at the Frederick Marathon (I have no idea their names but it is a father/daughter who were impressed by my lack of running but clear goals of taking lots of pictures). About a mile into the race, I saw a Marathon Maniac with a familiar gait. It was my friend Belinda from Umstead 100. It was a real treat to run into her and we actually ran the better part of 10-15 miles together. I would stop occasionally and lose her but ultimately I would catch up. She was pacing herself because she had the Steamtown Marathon tommorrow (insane, eh?). Another real treat for me was running into my friend Elvia and Lisa from the Niagara Ultra in 2006 (my first time at the Niagara Ultra). At about mile 8 I heard "is that you Tammy?" and looked around and it was my friends from Niagara Ultra. We had run the better part of 30 miles together that year. That was my best time at the Niagara Ultra when I came in 6:58, back when I did not realize they had an early start option and were pretty lenient about finishing on time. We ran several miles together during the race and after I finished, I walked the course backwards and found them and ran/jogged/walked about half a mile with them.
It was a great day for a race and I really had a great time. I will write more tommorrow but let me just give you a bit of advice: a Peanut Butter Iced Chocolate Cupcake from "Cake Love" at mile 14 might not be the best idea:-)
Posted by Runner Tammy at 4:30 PM

Labels: Seeing lots of friends at the Baltimore Marathon

Hi Tammy, thanks for stopping by my blog. Wow! you run a lot of races! Very cool. Also cool you're doing the DV-Vegas double too. Hopefully, we'll meet there!

A peanut butter iced cupcake?? Sounds wonderful! worth stopping for. Thanks for sharing the photos. wish I could have run a marathon this weekend with the fabulous weather.

Lisa,
So great to hear from you...one day I'll post about all the races Gilligan (my dog) has run about 100 meters but gotten his picture taken as though he ran the full event!

Emmy,
I eat alot during races...the best treat was at the 24 hour race: a cupcake at "the Gingerbread Construction Company". The Chocolate Dream is the BEST!