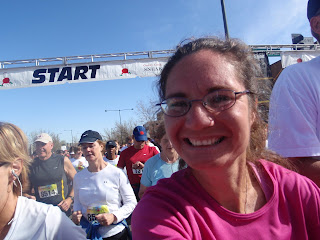 At the start of the Cherry Creek Sneak 5 miler. This race has been run many years and the announcers suggested there were over 10,000 entrants for the 5 miler, 5 km, and various shorter distances for kids. It was definitely a well run and cute race. 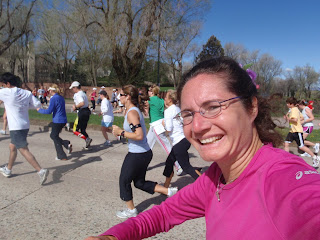 Along the course, I tried to capture the moment. The course had a few out and back or 270 degree angle turns where you had the opportunity to see runners ahead or behind you. I found this alot of fun because I could cheer on and interact with some other runners. 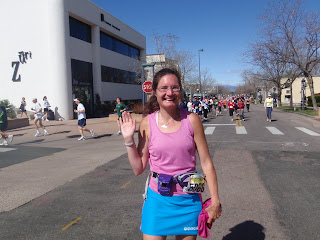 Near the end of the race I took a moment to snag a spectator to take my pictures. Here you can see there are lots of runners. While it was suggested that the course would start opening up about mile1-2, I never really had much space or was alone. It wasn't terrible however, after Umstead, my Feb/March marathons and Rocky Raccoon, I just am not used to 10,000 runners. 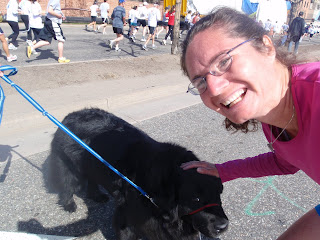 During the race I saw a very cute Newfie. She was actually very small but very sweet. As you can observe I was about 40 feet off the race course for this "heavy petting" session, but it was so worth it. While I love seeing new places, meeting new people and traveling in general, I do miss my pets, so anytime I can get some critter-lovin I am all over it. 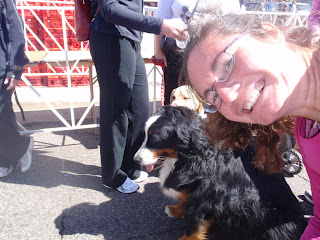 With a Bernese Mountain dog after the race. In fact, after this race I ultimately saw 3 other Berners and heard a rumor about a 4th Berner who I did not get to meet. Berner owners are always so nice and tend to let you pet their dogs...and some will let their dog rough you up a litle bit as the dog tries to lean on or knock you over. Gilligan does this to nearly everyone! And I interpret it as a sign of love and affection.

Today I started my day by running about 3 miles to participate in the 2009 Cherry Creek Sneak. I signed up for and ran the 5 miler. I debated signing up for the 5 km as well but decided to simply run the course backwards cheering on the 5 km runners.

The course for the 5km and 5 miler were very similar so this also gave me a sense of the weather as well as the course (which was really flat). Sadly I made it about 3 miles in 30 minutes then the altitude hit me...I was wheezing and whimpering like a sissy seal-level girl. Utlimately I finished the 5 miler in 48 minutes and change. I have no idea what my chip time was but assume it was about 48 miles.

The race was very well run and the course very cute. If I happen to be in Denver during a future race I will do it again. As a celebratory treat I got a tasty cupcake. Sadly the altitude made me feel really nauseous right after the race, so I am planning to eat my cupcake in a bit. Of course it will be followed by Rocky Mountain Chocolate Caramel Apple and a Milk Maid Gelato...I am powering through my Umstead calories.
Posted by Runner Tammy at 4:32 PM

Congrats on the altitude-y 5-miler and on being smart enough to bank those calories.

After running 100 miles, shouldn't you be able to eat like lard straight from the tub, three meals a day for like a month?

Not that I'm recommending lard, but something equally fatty and calorie-intensive, like deep fried donuts, which is basically just fried lard with confectioner's sugar.

But that sugar? Man, it's like faerie dust, because donuts may be made from the same basic materials as lard, but, sister, they don't TASTE like lard!

Lard from a tub...that would necessitate at least three puke buckets! And I just cannot acquire and carry around that many (two is my limit and they are in the car).

I grew up in Jersey and went to school by Atlantic City (go Stockton State Ospreys!) and yet I am unaware of deep fried donuts. I feel my life might not be complete. Am I that out of touch?

Well, there are caramel/chocolate apples, cupcakes and gelato to be had, and today's per diem to spent so I better go.