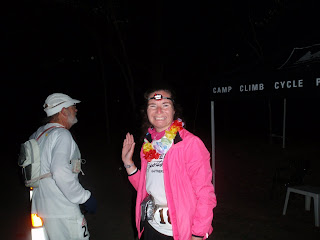 At the turnaround by the airport spur. Only 99 miles to go, WAHOO! 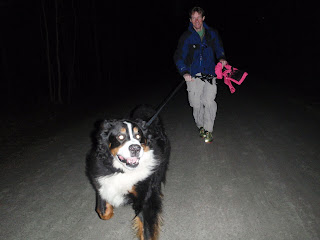 My fans and cheering section: Gilligan running at high rates of speed and Tristan. But wait a second, isn't that my pink jacket??? I guess they were trying to ensure they could outrun the law when I reported their thievery. 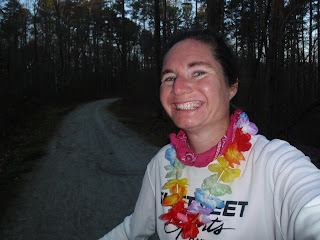 Along the course early in the day (before sunrise). Based on other pictures around this one, I would guess it was about mile 3 or 4. 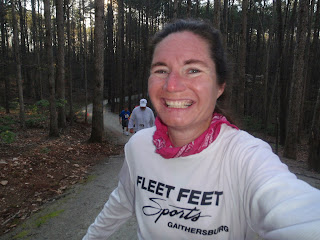 Walking up one of the hills...a sneak peak of what the "sawtooths" have in store for us! While the second section of the course is definitely hillier then the first, this does not mean the first section is without it's hills. By the end of the race, I was really struggling with both the uphills and the downhills! Contrary to the sign along the course "Hills are (NOT) your friends" (well unless you really stink at determining who are your friends and who are your enemies:-) 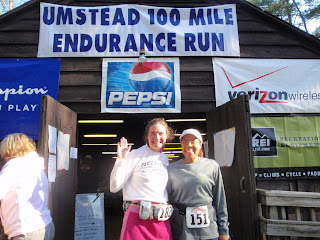 With Angela at the completion of my first lap. We sporadically were near each other and ran several miles together but our pace was just off and our walk breaks seemed to be at different times.

After the fireworks, it was time to start my 100 mile journey. I started off moderately slow, initially walking through the rocky/rooty jeep road we follow for about half a mile. After a bit I gained a bit of confidence and started jogging slowly. Pretty soon we were at the Airport Spur and I heard Gilligan who was cheering on the runners via “Barks” (since he doesn’t speak English). Then I saw my crew/cheering section of both Tristan and Gilligan.

I was feeling really good, catching up with lots of friends and just enjoying the pre-dawn hours of the morning. The topics of conversation were varied and included the pre-requisite, "Have you done this race before? Are you doing the 100 or the 50? Have you done a previous race this distance or is this your first?" among others. I think about 30-40% of the runners were doing their first attempt at the 50 or 100 mile distance. And many runners would then ask for advice from "seasoned veterans" like myself. It was pretty odd considering that I consider myself a novice at this, but I did my best to convey helpful suggestions like: take care of your feet, make sure to have items available when you might need them (for example don't leave the aid station at 7 p.m. without a headlamp--well unless you are Dave James, Serge Arbona... i.e., the top runners but they are running machines!)
I settled into a nice 13-15 minute mile pace during this lap. I would run/jog the flats and the downhills and walk the uphills. Once in a while I would inadvertantly run up a hill, but I tried not to make this mistake very often. Everyone was very upbeat, positive and happy during this section of the race. I was very happy when it became light just after I ran by Tristan after the airport spur. And by the time I got by the lake at mile 4-5, it was very light out. I think the sun rose after I passed the second aid station, but all I was looking for was enough light to see indents, hazards and other items on the course.

Early on I ran a bit of the race with Rhonda. I knew Rhonda from my 2007 Umstead. In fact she shared her shampoo and soap with me during my post-race shower when Tristan disappeared off the face of the earth for what seemed like hours. She was planning to run the 50 because she is being mentored to be the future RD and thus must learn what it takes to be an RD. I know she will be an excellent RD! In her future capacity as the race director, I told her Blake might have misunderstood one of my race report comments/blogposts. I am a female. Thus I sit down (as best I can) when I use a sanctioned potty. But at the end of the race, I have issues with getting up. So having a handle bar in the porta potties is really nice. In fact last year it took me 3 laps to find the porta potty with a handle. This year with Rhonda's advice I learned it within 1 lap. I went into a random porta potty by AS #2, which had no handle. But after I got out Rhonda mentioned the second one from the end had a handle. That was my "go-to" porta potty after lap 1.
At AS #2, I grabbed some food and drank several cups of Gatorade. The kind and helpful volunteers refilled my water bottle while I took a quick break to check out where my drop bag was. I put my hawaain lei (that blinks but is really heavy because of the battery pack) in my drop bag as well as took off my pants since the day was getting warmer. I returned to the aid station area and continued eating a drinking for a few more minutes then it was time to head out back onto the course. My AS visit was just about 10 minutes, not great but I’ve spent 20 or 30 minutes in aid stations before so it wasn’t too bad. After a quick “Thank you”, I was back on the course.

During the sawtooths section (a moderately hilly section of the race), I continued to run the flats and downhills and walk the uphills. All the runners were friendly and encouraging. I met my friend Pete and ran a bit with him. Over the course of the race we would run together, then one of us would get ahead of the other somehow. During this lap I also had the privilege of running with my new friend Stephanie from Hawaii. There were at least 3 folks from Hawaii (a couple who stayed ahead of me much of the race whose name I completely forget and Stephanie). Stephanie was good company and told me about a really cool race in Hawaii, the run in the sun (or to the sun…it’s a little foggy). I have heard about this ~35 mile race up Mauna Lao (or Kihlahai or some other volcano—clearly I am lazy author because it is up to you my readers to google this puppy up to figure out what I am talking about;-). One of the reasons it stayed below my radar is that the time limit is too stringent for a more leisurely runner like myself. But Stephanie suggested there is an early start. This race may have to be put on my “to do list”. Stephanie was really good company and ultimately finished the race not too far behind me. Because paces, length/speed of walking breaks and bathroom breaks vary remaining with one person consistently was a bit challenging. It is neat during the course of the race to meet a variety of people and introduce others. Soon enough I was heading into the main aid station completing 12.5 miles. As I entered I was very close to my friend Angela, so I got someone to take our picture in front of the building.

At the main aid station, I gave my water bottle to a nice volunteer (the volunteers swarm you like locusts…in a good way). While my water bottle was being refilled, I headed into the building to hang out with my drop bag. I forget what I was doing (I think I took off my long sleeve shirt), and then riffled through my stuff. I think I was looking for sunglasses but could not find them. Thus essentially I just messed up my bag for no reason. This is even more discouraging because I put my drop bag to the back of the room. This meant I added a good 100 feet or so to my lap each time I went to my drop bag (which I did virtually every lap!). It was not until lap 6 that I decided I should move my drop bag. What a fool I am! After my less than satisfactory drop bagging, I headed out to the food section of the aid station and ate some banana’s, M&M’s and salted up some potatoes. After about 10-15 minutes of loitering, I thanked the volunteers and was soon back to onto the course continuing my 100 mile journey to absolutely nowhere (hey we start and finish at the same place, thus in my book that means I went nowhere after ~28 hours!).
Posted by Runner Tammy at 2:26 PM