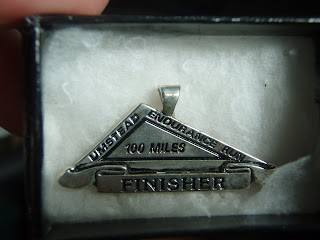 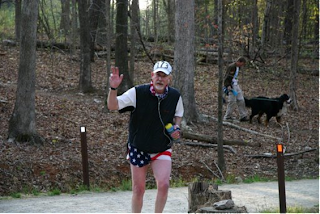 In the background of this picture, you can see Tristan and Gilligan lurking around. This year, it looks like the weather will be perfect again, so Gilligan has freed up his calendar and will be traveling and spectating at Umstead. 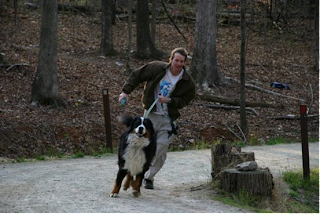 Gilligan stops lurking and starts running (I am behind the cameraman for this action shot and Gilligan finally realized I was on my way jogging towards him and Tristan and he was exited to greet me). This incredible burst of speed lasted about 20 seconds...but Gilligan doesn't know how to pace himself so he was wiped out after this effort. It's good he was only participating in the 100 m (meter, not mile) race. 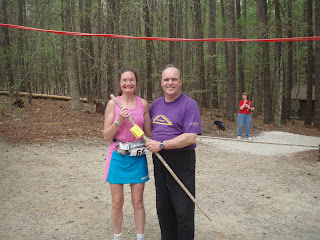 With the Race director, Blake Norwood being given my "Finisher's Norwoodie" (a stick given to the final female, which I qualified for in 2007--in fact I also qualified for a perserverance rock that year as the last overall finisher). I keep my stick around just in case someone tries to pass me in the final lap ensuring I never am last again:-)
Posted by Runner Tammy at 11:30 AM

Hey Tammy, See ya in a few days...Best of luck out on the course and look forward to seeing u over and over again....ummm I will try and keep my blisters at bay :-) but ya know they like 100's -- LOL

I must say, I love my necklace. I do not take mine off either. A woman in my watercolor class said 'you ran 100 miles and all you got was that little thing?' -haha --I told her that I do it for the personal challenge, but this was a nice token. I will tell you another story but the necklace but don't want to jinx Frank or me so will tell after this weekend...

Let the count-down begin! In fact in my work countdown clock (hours left until I go on leave) I am well into single digits...WAHOO!

I am ready to have fun (if by fun you mean feeling nauseous, tired and at some point beligerant and wondering why in the world I wasted perfectly good money in a recession:-0

I will look forward to hearing your necklace story after we both finish Umstead Sunday morning (you clearly earlier than I!). By the way, your necklace says "One Day", not just "Finisher" doesn't it??

Have fun this weekend Tammy! I'll be thinking about you!

It will be so sad to not see you as you pass me numerous times throughout the race (unlike the last two years:-)

And this year assuming weather.com is now correct with the prediction of 70's and sunny, I would be able to see you well in advance (unlike last year during the hours and hours of drizzle and rain when at least I was pretty much looking down trying to get as little rain in my eyes).

Well, enjoy your sleep Saturday night, sadly even if I harness my inner-Billy it still will take me 27 hours to finish at a minimum:-)

Thanks for your comments, Tammy! I'm running the Cooper River Bridge Run 10k this weekend with about 40,000 others. After that I expect to ease off for a while so my tendons can fully heal. One foot is much better but the other hasn't improved. PT may be in order. Glad you're running my next two marathons. I'm looking forward to experiencing the different settings and sizes of marathons. And hopefully I can pick up speed a bit, too. Good luck with Umstead! That's an amazing experience, I'm sure! Be well.

Have a great race, Tammy. Please tell Gentile to do the same. Nice 100-mile list but don't forget you will always have with you the most important things - your big smile, sense of humor, and joy in your heart. Have a great run!

It was great fun to meet you at Lower Potomac and I am glad we shall run together later this year. Your next marathon I am sure will be faster (and probable easier) because you know what to expect. Also, Richmond has LOTS of spectators along the course which provide lots of energy. Good luck at this weekends 10 km!

Thank you for your kind words! I will miss seeing your smiling face all along the course this year. Regardless of the weather in 2008, you always looked so happy to be running.

Gilligan cracks up most of our neighborhood because most of our fellow dog-owners know Tristan and I run, hike, and do all sorts of activity. But Gilligan is perfectly content to roll over on his back and do nothing. In fact virtually every walk is a struggle because he would rather be inside eating yummies and watching TV!