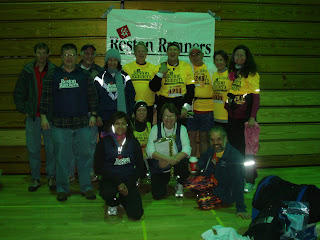 At the start with the other 5 a.m. Reston Runner starters and the crew. Although I do not live in Reston, this organization graciously has adopted me a member from the wrong side of the river:-) 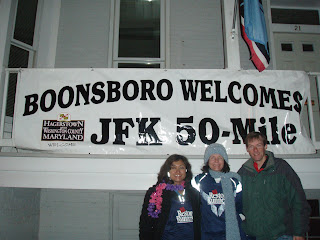 My Crew from 2007: Imelda, Cindy and Tristan in Boonsboro near the start line. Notice everyone is bundled up. A different picture of the bank at Boonsboro shows it was 22 degrees last year at the start (which is balmy compared to the 13 degrees it was in 2006!) 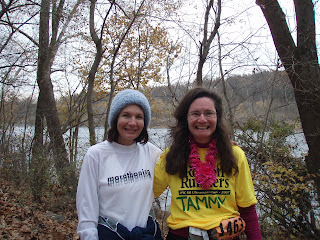 With my sister, Cindy at about mile 42 along the Potomac River. She agreed to pace me from mile 38 for 6 miles. Unfortunately due to a math error on my part (next aid station at mile 46, she was committed for 8 miles, then she kindly agreed to get me to the finish because there's not much difference between 8 and 12 miles!) 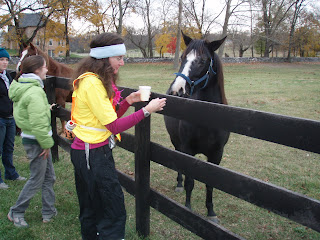 Feeding a horse while approaching Williamsport (the finish). Warning: This horse bit me right before this picture was taken... I don't think I will pet it this year! I believe I have now survived a year, so on a positive note, it did not have rabies. 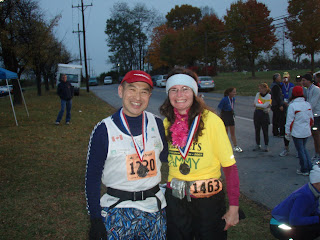 With my friend Richard, from the Niagara Ultra 50 km race in Canada. We ran bits of the JFK together although ultimately he beat me by about 30 minutes. At one point Richard was in the Guiness Book of World Records for fastest time in doing 7 marathons on 7 continents. I hear he is starting to think about trying to set the recorrd for doing 7 ultramarathons on 7 continents now that they have an ultra in Antarctica..crazy, eh??


Today I will be traveling to Hagerstown in preparation of JFK 5o miler. By the way it is a bit over 50 milers. Ultramarathons tend to be over the stated distance. As a statistician I can understand this lack of precision would suggest the margin of error for ultra-marathons is pretty significant (+/- 1 mile at JFK, but +/- 3 miles for VT100!). My last 3 JFK's I have run in: 12:27, 13:07 and 11:49. Clearly I have alot of variability. My first year I actually injured my leg pretty badly with a fall on the AT (Appalachian Trail). The next year I was really conservative and got with a group that was going very slowly on the AT. Last year I got into the top 25% of runners getting on the AT and ran and walked it appropriately and then at the end my sister paced me the last 12 miles keeping me moving when I was too lazy to want to. I have no idea what my time will be this year, but it would be nice to break 12 hours.
I am mentally and physically ready. Last night I packed my bags and my drop bag that my sister Cindy will carry from place to place. I am really lucky to have a great sister. This year because of a recent foot surgery she will not pace me, but will cheer me on at the various aid stations. She is always enthusiastic and encouraging and I would give her an A+ for both pacing and crewing (and for sistering:-).
Last year I had a great time at the JFK 50 miler and was able to catch up with lots of friends and meet lots of new friends. This year I know many other runners. I know many of the Reston Runners including my friend Peter who I have run over 10 races concurrently (always finishing within minutes of each other but never together, as well as Emmy who carpooled with Tristan and I during the VT100 from the crazy hotel to the start line, I think Wayne, Monica who I ran a bit of Richmond, the 5 hour pacers from Richmond, Leo Lightener who I was lucky enough to run about 15 miles of JFK50 my first time 3 years ago and lots of others.
Posted by Runner Tammy at 4:27 AM

Tammy, good luck at JFK! There is a whole team of people going from one of my running clubs, the Albany Running Exchange. They're a great bunch if you get a chance to chat :)

Best of luck this weekend (as I type you are in the midst of your event. Perhaps we can meet up at Disney. Heck, we are both going to be at Umstead in 2009...might as well meet.

Laura, I saw many from your club passing me (pretty much that was the story of my race). They all were very friendly. I hope I will get to meet you at some race.

Anthony, we could run Disney together. I could take the still shots of the characters and views and you could document our progress and intimidate other runners:-) By the way, I hope your shoulder is all better from Javalina.