My first age group placing at the Cheseapeake and Delaware Runfest Marathon! 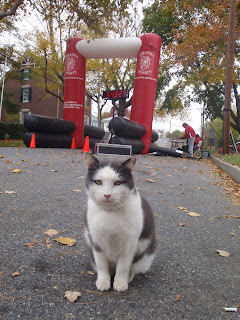 My award, a finisher's cat perhaps?? Sadly, no but you can see my award below. 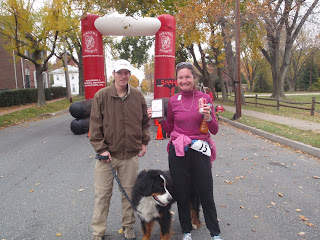 My family: Tristan, Gilligan and I with my award (and a celebratory coke...although this was drunk after my 2 p.m. deadline for caffiene!) 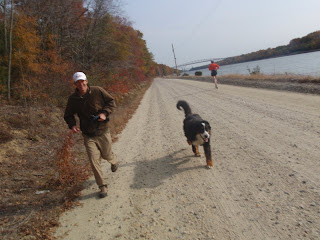 Tristan and Gilligan resuming their role as bandits of the Marathon 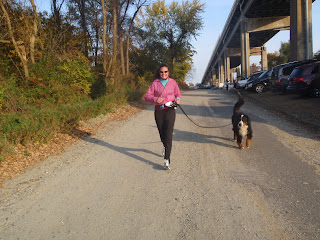 Tammy and Gilligan running like a bear is chasing us! 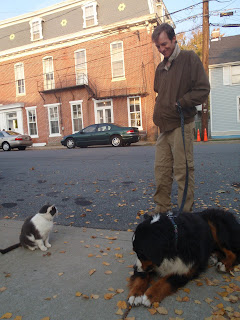 Before the race sizing up the spectators and/or competitors

YEAH!! Congrats on your very first award. I loved this race report with the photos of the cats --even Gilligan seemed to like the cats.
Think I will send it to Ultrarunner Barbara Sorell as she loves cats (my cat is massaging my quads as I write this -thankfully). Parts of this marathon sounded like JFK...see you there soon enough -yikes.

Thanks for the congrats. This race was really nice and fun. It was similar to JFK particularly the towpath. Although others find towpaths to be a bit monotonous, I find new things to focus on at every bend.

I like the towpath at JFK and because it is so non-technical I can spend the entire 26 miles chatting with other runners (and cheering fast folks like you who pass me:-)

Tammy -I didn't mind the towpath last year.
I also spent the time chatting, and looking forward to eating every 3 miles --and then they have mile posts:))