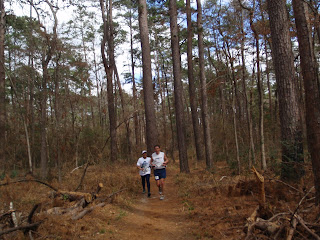 My friend Angela I with Andy Jones Wilkins in the background (I was a bit puzzled how he & Scott knew I took pictures along the course after the finish until I looked more closely at my pictures...apparently first and second place men were stalking my friends:-) Angela and I have run about 15 marathons/ultra's together during the past several years. 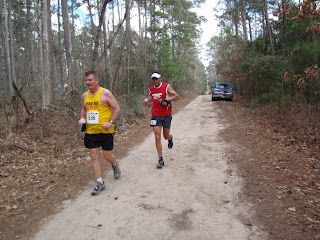 My "Maniac" friend Steve G. with Scott J lapping him. I liked taking pictures in this area because as you can see the surface was pretty nice and non-technical. My understanding is that Rocky Raccoon used to have more surfaces like this in the old course. I hope they go back because the technical section nearly killed me! 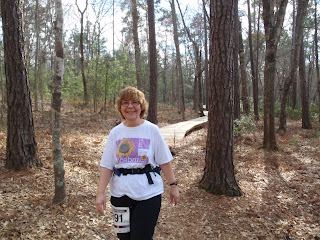 My friend Luann T from Reston Runners. She has race walked a bunch of 50 milers while her husband Bill (below) choses to race the 100 miler. It is really sweet that they are both out there on the course encouraging each other. 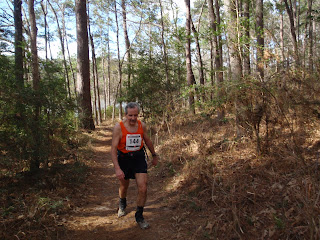 My friend Bill T from Reston Runners who finished the 100 miler in just over 24 hours. He has run alot of ultra's including Western States among others. He is a running machine! 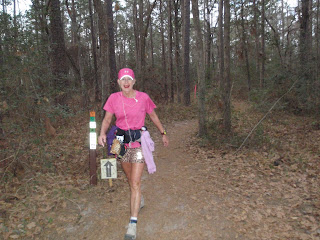 
I am still working on my race report, but hopefully these pictures show what the course was like (for those of you who didn't/couldn't run it). Perhaps if I took less pictures I would have broken 10 hours:-)
Posted by Runner Tammy at 4:53 AM

TAAAAMMMMMMMMMMMEEEEEEEE'S HEEEEEREEEE! Hey Tammy! What a trip seeing you come through the Dam Road aid station each time! You were nothing less than a moving party! Awesome job on getting a new PR in a freakin' training run!!! Glad you got to spend some quality mom-time and glad you chose Rocky Raccoon!!!

Lynn B
Dam Road AS Captain

And this is why the DAM Aid Station holds a special place in my heart...I am finished running and they still announce my arrival!

I will definitely be back next year.

Thanks for all the kind and encouraging words each time I came through your aid station. Your volunteers were AWESOME and gave me so much energy!!!!!!