A weekend without a marathon/ultra but lots of activity! 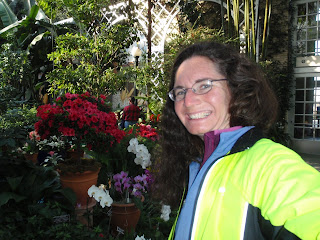 At the Botanic Gardens after my jog in downtown DC. It smelled really good with all the variety of spring flowers including azalea's, orchids, hyacinths and other pretty and nice smelling flowers. 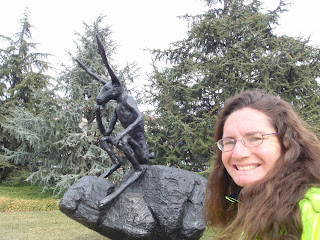 With one of my favorite sculptures, the thinking rabbit, in one of the sculpture gardens near the National Mall in downtown DC 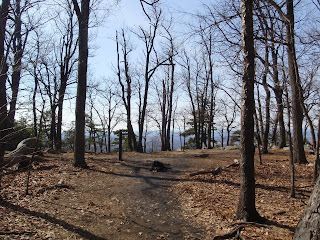 Gilligan on the summit of Sugarloaf Mountain (you can see him in the distance, lying down refusing to get off the summit, luckily after a few minutes he decided to join me after a bit) 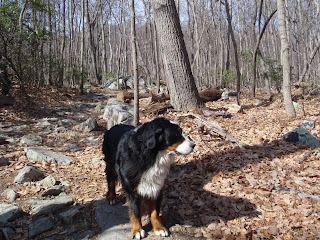 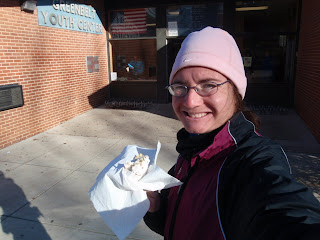 
This past weekend I was pretty busy doing all sorts of inside and outside stuff. On Saturday I took Gilligan to Sugarloaf Mountain. On my way to Sugarloaf, I went to one of my favorite Donut places, Lancaster Market for cream filled donuts (the pre-race food of champions as you can see from last weeks marathon!).
Upon getting to Sugarloaf, I initially abandoned Gilligan in the car (hiding the donuts and putting them in my Gortex jacket in hopes it would be strong enough to protect my donuts) then ran 2 repititions of Sugarloaf Mountain. After 2 reps, I came back to the car, hiked Gilligan up and over the mountain (including an out and back when I realized I had advised a pair of nice elderly gentleman that a trail was about 1 mile from a certain point...as I continued running with Gilligan, I realized it was closer to 2 and I missed telling them about one extra turn-I told them about 1 turn but a second critical turn I forgot). After running backwards to tell these gentleman that my guess-timate about distance was off (and that I omitted a critical juncture) I told them of a shorter but steeper route to the summit (then I took this route with Gilligan).

After Gilligan and I reached the summit, I continued on and as I got close to the car, I ran into a friend (and former colleague, Feng Z. from when I worked at FDA-CDER...the Drug approval center, i.e., same place my husband currently works). After learning she was just starting her hike, I decided it would be more fun to hike with company then drop Gilligan back at the car and do hill training alone. So I hiked an additional 5 mile loop with her. I think by the end Gilligan was really regretting coming along for this outing because I think at the end of our ~4 mile loop he had enough hiking, a 9 mile hike was WAY more then he bargained for. But I had a really nice time. It was a beautiful day for a hike and Feng is very good company. Hopefully I will be able to hike with her in the future (now that I am really confident with my marathoning ability, I can easily hike pretty far on Saturday then run a marathon on Sunday).

Sunday I made plans to meet up with my sister to go the Adventure Travel EXPO in downtown DC. When I walked Gilligan in the morning about 7 a.m., it was cloudy but moderately warm (38 degree's is what weather.com). About 2 hours later as I was getting ready to leave, it had gotten markedly colder and started snowing pretty heavily. Luckily my trip to DC involved a short car-ride to the Metro, then a climate controlled ~1 hour ride to DC. Cindy and I met up a little before the EXPO started, grabbed a coffee and ate some yummy donuts (from Sat) that I was sharing. In fact my sister ended up eating only 1/2 her donut because at some point she mumbled something about it being too sweet (she's clearly nuts!) so I got 1.5 donuts. Life is good!

We then went into the EXPO and walked around for about 2.5 hours. I think Cindy is looking for idea's about trips she is planning to go on with friends (Fiji this coming May) and in the far distant future (after she retires from the Air Force in a few years). I think she also was looking for information about Belize (I forget why). The EXPO I think was geared towards people looking for guided travel idea's both in America and Abroad. There were a few booths about local (PA, MD, VA) and less local area's including state and national parks (Utah, Alaska). I picked up a few brochures and lots of freebies (lip balms with SPF, band aids, bottle openers, carribiners were among items I cannot have too many!).

After we finished wandering the EXPO, Cindy took my goodie bag home with her so I could run around DC. I ran up and down the Mall from the Museum of Natural History to the Lincoln Memorial and then back to the Botanic Garden right next to the US Capitol. I believe this is a 4 mile run. It was really windy and I did run a bit aimlessly so this took jog me about 1.25 hours. Ultimately I ended my jog at the Botanic Garden which I spent about 1 hour inside enjoying the various plants, flowers and folliage as well as the various exhibit rooms (desert-which is hot and dry, jungle-which is hot and humid and other exhibits including some pretty spring flowers such as hyacinths-which smell really good, daffodils, orchids, azalea's and other pretty smelling and looking flowers and bushes. The Botanic Garden was a nice way to end a day trip to DC and a nice way to end my weekend.
Posted by Runner Tammy at 3:17 PM

Labels: Run and Hike at Sugarloaf with Gilligan and a friend, Travel EXPO and run through DC

wow --you had a nice weekend, even without an ultra. The photo of Gilligan lying down on Sugarloaf mtn. is priceless!! And he didn't eat your donuts! You must feel safe with him. And Botanic Gardens are very uplifting this time of year --our NY Botanical garden has an orchid show starting this weekend-won't miss it.

Alas my "slacking ways" are going to be abruptly stopped this weekend when I do the B&A trail marathon near Annapolis MD (which is my 3rd or 4th time running this really cute smalltown marathon).

Gilligan cracks me up. About every 5 minutes he would disappear from view behind me. After a bit he would come trudging along a few hundred meters behind me. He definitely much prefers lying down over hiking! Somehow there is a bit of a mismatch between Gilligan and Tristan/I. But once in a while he does have a burst of speed for about 100 meters or 5 seconds!

The Botanic Gardens in downtown DC are really pretty. The tree's and the rooms remain the same, but there are sections that get redone every few months. At Christmas, the section with the small reflecting pool (which now has daffodils, azalias, lilies and orchids, has all sorts of winter related plants and bronze sculptures of the various DC monuments). It is well worth a trip here in Nov/Dec. Maybe you can come here for JFK and stay a few days to see the sights! I'm sure our cats would share one of their rooms with you (they pretty much control the whole house...Tristan are allowed to stay as visitors but probably shouldn't get too comfortable:-)

Tammy --I would love to combine a trip to D.C. with a race but alas would brng my kids which means a hotel (but we could come visit you and see your dog and cats)--in fact, I might plan a D.C. trip for after Umstead --our April vaca is april 5-12:)
Funny that Gilligan's temprement is 'ill-suited' to your and Tristen's endurance lifestyle!! If I was a big dog like him, I guess I would want to lie around. Good luck this weekend!! That trail marathon supp to be a great local event.

You should extend your Umstead trip and drop by DC. Maybe Gilligan and I could join you sightseeing at DC. And during that week, he would be the speedy one in the family.

April in Downtown DC is beautiful because the Cherry Tree's throughout the city including the tidal basin are typically blossoming. In fact our daffodils and crocus are starting to pop out of the soil already in our front small garden...I can hardly wait for spring which is just around the corner!