A few pictures of San Diego and more VT100 preparation 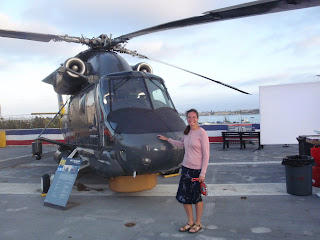 Here I am in front of a Helicopter during the social event on the Aircraft Carrier the SS Midway. I spent a bit of time exploring the various helicopters and planes, then after about 2 minutes headed for the desserts! 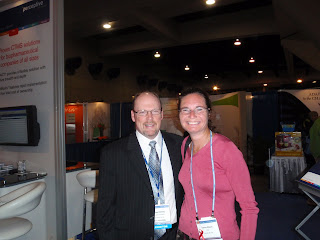 Here I am with my friend Mike a fellow Marathon Maniac. I was quite startled when I heard my name as I was walking the EXPO one day. It was my friend Mike from the Marathon Maniacs and 50 States Marathon clubs! Mike is alot faster than I (sub 4 hour marathons by ALOT) but we Maniacs/50 Staters are a tight knit group, our insanity of running many marathons in a short amount of time bonds us. 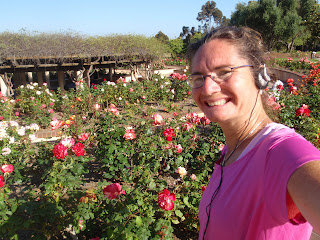 Here I am at the Rose Garden at Balboa Park on an afternoon/evening run. I ran most days when I was in San Diego. I liked to run along the harbor as well as to Balboa Park (where the Zoo is located). One day I kind of ran too far and ended up having to get a taxi back to the hotel. So I had to put in a reciept for a one way taxi fare....so far this single direction transport has not been questioned, which is good. 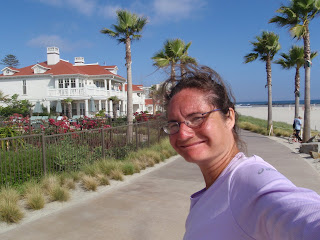 One day I took the ferry to Coronado Island (really it's a peninsula) so I could try a new location to jog. It was a really pretty Island with lots of beautiful and large houses. I enjoyed jogging along the boardwalk, up and down the various roads and along the various waterways. I also got a sunburn! I would go outside for about 20 minutes and turn bright red! 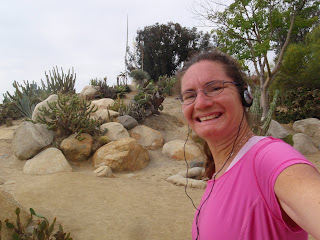 Here I am on a jog to Balboa Park one morning. On this day, I knew not to continue on too far. This is the Cactus Garden which is quite interesting and has lots of different cacti. I touched a few and poked my hand up a bit. I really need to stop trying to pet animals or touch sharp objects!
In this park I was a little nervous because I asked a docent about the presence of rattlesnakes and she suggested they are lurking around. Nothing scares me more than rattlesnakes, so I did not go onto more obscure trails. I really need to get over this fear if I ever plan to do Western States!

Today I had a GREAT morning. I recieved an e-mail from a runner friend, Dan R. who will be in VT for a personal trip and noticed I mentioned that I was pacerless from mile ~90-100 at Vermont. He asked if I was still looking for a pacer and volunteered to keep me company.
Dan is a really great guy who I know several different ways: 1) I met him briefly at Bull Run Run 50 miler this past April (as well as his girlfriend Elizabeth who was crewing for him and is so sweet!) 2) He belongs to at least one of the the same running clubs as I do, the Virginia Happy Trails Running Club and 3) He is friends with super running machine Jamie D and 4) I stalk his blog (yeah, I admit it, I stalk people on blogs:-).
Upon reading his e-mail, I immediately responded, I still need a pacer and would LOVE if he would keep me company for the last few miles.
I reminded him that I am not remotely as fast as he (he placed 10th overall at Bull Run Run...I on the other hand might still be out there)
And in my mind I thought unless there is a large portion of dessert at the finish and that is the last dessert on earth I probably would never be as fast as 99% of the population. With the last dessert on earth at stake perhaps I could come in first place, but we'll never know, will we?
Dan said he was fine with my lack of speed. He is planning to park at the finish and run his way backwards along the course to mile 88 (we ultra-runners don't get too anxious about specific distances because 10=12 miles, right?), then pace me into the finish. Based on my last years time I should arrive at Bill's about 4:48 a.m.
I mentioned to Dan that I recall I arrived at this aid station before 5 a.m. but left a bit after 5 a.m. I had to get weighed (just a few moments) then seemed to sit down for no good reason. I believe I might have wasted about 15 minutes at this aid station and as far as I can remember there was no reason for this. I had no shoe change but think I might have been depressed about starting up running after losing/breaking my pacer.
This year I will be handed off seamlessly from Theresa to Dan. And I know both Dan and Theresa will take really good care of me because both have been so encouraging via e-mail messages!
I am getting really excited about VT100! Only 7 full days to go.
Posted by Runner Tammy at 2:14 PM

From your previous post - that's AMAZING that you've been training for VT100 with no overuse injuries. Sounds like super-smart training.

And oooohhhh - your dermatologist is NOT going to be happy with your latest sunburn, chica!

good luck in VT! I am commenting using a laptop w a trackpad so i'm keeping it short today because trackpads suck and freak me out a bit, truth be told

I am confused, didn't you just run this VT100? I guess I can't keep up with all the ultras you do! that is so great!.
I am with you about the rattle snakes or snakes for that matter ugghhh, I live surrounded by a few acres and yeah, we do see them sliding around.
Good luck, I will check out your blog for updates

I have not trained as well for this 100 miler as I did for Umstead 100 back in April. But hopefully muscle memory will kick in!

Oh the sunburn is the one I was so afraid if my "concerning mole" was actually cancer I would have to go see the dermatologist with lobster-face. Luckily it was nothing so alas no visit to the dermatologist for another 6 months (which puts it right around Javalina 100 when I might be pink faced again!)

I wonder if by short you mean you will return in the future and make some comments about how Gilligan would simply run 100 meters (not 100 miles) and consider himself a champion. Sadly he is not coming to VT so that we miss minimal work and I only have to sit still for ~3 hours on the plane and car ride home. I can only imagine how horrible sitting still for the 12+ hour drive from VT to MD.

Last year on the course at VT100 I did see a snake. It did not please me. Luckily it was a garter snake and relatively early in the race so I could easily take several steps in the other direction while I figured out what type of snake it was.