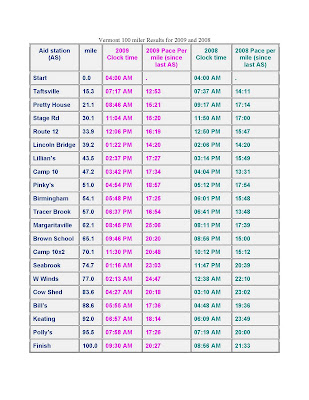 Here is a summary of my VT100 miler splits. My husband (who is a sweetheart and an AWESOME SAS programmer) created some code that can use the splits provided on the VT100 website to calculate the time arrived at each of the main aid stations as well as the pace between major aid stations (if there are any others out there wanting the SAS code or a printout like this, drop me an e-mail).
Unfortunately due to rounding errors (the race management group truncated the seconds of our times), this loses about 10 minutes to the final race time.
Regardless, this gives a sense about what my two VT100 miler experiences were like.
This year I started off a bit faster. This was sort of done on purpose to get a big buffer in case I slowed down (apparently I needed this more that I realized). Also, I knew what the course was like and felt a bit more confidant about moving quickly on it at various points.
Considering these results, I LOST alot of time changing my shoes. I know this based on my 16 minute/mile split at Stage Road (shoe change #1) and my 25 minute/mile split at Margaritaville (shoe change #2, when I loitered a bit with Tristan and wandered around aimlessly).
After Margaritaville I lost a lot of momentum and was really bummed out about life in general. And after I lost my pacer almost immediately following Camp 10 Bear I also got depressed and started wallowing in self pity. Both locations you can see a dramatic drop in my pace. But then I really picked up the pace when I acquired both Shane and Dan at mile 77 and 88 respectively. They were GREAT pacers and I was so lucky to have them.
Speaking of getting bummed on the course, I had a bizarre experience at VT100. I will call it a "reverse hallucination". Somehow between when I started the race and I finished the race I ended up with a moderate sized gash (~1 inch) in my calf. I have no recollection of getting this battle wound. I showed it to some of my co-workers (who are medical doctors) and tried to see if they could identify where, what and how this happened. None could.
So my proposed reverse hallucination (when something occurs during a race but you have absolutely no recollection of it), is that I was attacked and bitten by a fox somewhere between mile 62 and 77. During this 15 mile interval I was essentially alone (no one passed me and I did not pass anyone). Thus I easily could have been kidnapped by aliens, approached by a serial killer or even attacked by a fox.
Tristan suggests I somehow got scratched by a branch or ran into a rock. However, since I do not buy into Tristans hypothesis "The simplest explanation is right" (or some crazy long winded quote), I think I had a "reverse hallucination" and I was attacked by a fox (or maybe a small bear or bobcat would also work).
In fact Shane suggested he paced a person (who DNF'd cause that what Shane does to his runners) who saw many chipmunks running amok on the course. It is unclear what these chipmunks were doing or if they were attacking the runner; however, clearly there was a wild band of critters going nuts on the course.
I sure I hope I survive this!
Posted by Runner Tammy at 5:00 PM

Labels: A more detailed look at my VT100 Results

I don't think you once mentioned this gash causing you any kind of pain or discomfort! Although you did say, "whoo-hoo!" a lot, so perhaps that was some kind of exaltation of pain? Good to know for next time ....

Also, I know we were probably saying some silly things late into the night, but did I really tell a story about crazed chipmunks? While I don't remember it at all, I don't think it's outside the realm of possibility!

Wait, so now you are having reverse hallucinations??? And you were my pacer so I was relying on you to be the voice of reason.

I distinctly remember the chipmunk story. I can't remember if it was a runner you DNF'd or just a runner you passed, but it definitely cracked me up.

Definitely some fierce creature caused that injury, not a wayward branch or rock, IMO ;)

You sure you weren't attacked by one of those marauding cut-throats you insist hang out on Ultra courses waiting to waylay lone runners? You probably took his knife from him in the scuffle and ended up disemboweling him and now you don't remember it because of PTSD.

I have no proof for what I'm about to assert - it's just an intuition - but I suspect this was not the first person you killed.

Look around your house for a trophy you may've taken - usually an ear or a finger.

Whatever body part you took, let's hope you kept it above the waist, sister.

Thanks for backing me up...I knew I could count on you (first encouragement about my not-so-first place results and now about my run in with a wild and ferocious beast!)

I can't believe you think I am a serial killer. If I was, don't you think I would eliminate potential serial killers before they struck rather than fixating on the fact that I am all alone and pretty much my only defense is a bottle full of gatorade (and I doubt gatorade has enough acid in it to do anything productive or defensive!)

Anyway if I carried all this paraphenalia to kill people I would have all sorts of problems when I got to the weigh in's and I was overweight (and they will pull you from the course for that--6% of bodyweight is all the wiggle room we runners have).

Aren't you in VT now? Maybe you can scout out Southern VT and see if you see any remnants of my calf that was violently chewed off by a pack of angry foxes.

Hi Tammy, I enjoyed your reports on the Vermont 100, sorry I missed meeting you there. I also ran 2008 and 2009 and was trying to compile the splits and such. Where did you get the graph, or how did you make it again. That would be real cool to put on my race report, if I ever do one. Congrats on finishing, the course was a bit muddier that last year.

I enjoyed your reports on the Vermont 100. I saw quite a few of those dangerous chipmunks, they were darting back and forth across the paths. I had a few dings that I have no idea where they came from. Sorry I didn't get to meet you there, it was a crazy rushed two days. Anyway, when you get a chance, could you let me know where you got the graph so I can chart my 2008 and 2009 Vermont races. That is cool, I just would have no idea on how to make it. Congrats on finishing again. Maybe I'll see you at the JFK.

I look forward to meeting you on the trails,

P.S. I think our next shared event is the JFK50 miler which I will be doing the 5 a.m. early start.