Vermont 100, it's all about the Friends! 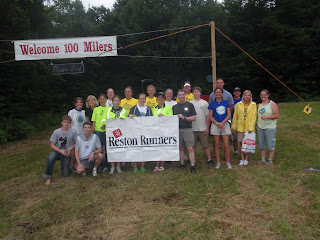 The Reston Runners (which I am a member--although I do not live in Reston VA) had several runners competing in the VT100 this year. We even snagged the Race Director Julia H. for this group photo which includes runners, crew, pacers and chauffers.

We have all been planning to do this event since early in the Winter (well except for me, I decided last July 20th!). I think everyone had a great time and knows why I like this race so much. 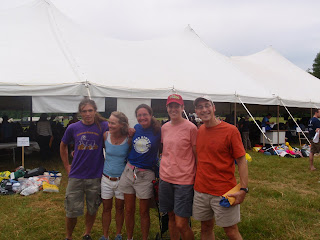 With my friends John(?), Emmy, Me, Chris and Frank after the pre-race briefing but before dinner. It was so great to see and catch up with so many friends before, during and after the event! 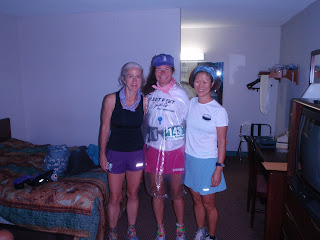 With my friends Debbie (left) and Caroline (right). I know Debbie from a bunch of ultra's and Caroline because we ran a great deal of the George Washington Birthday together.
Debbie was our driver/chauffer to the race so Tristan could get a good head start on his drive and hike in New Hampshire. Since I try to be self sufficient in races (with respect to his questionable crewing and pacing) this was fine with me. Thank goodness they had lots of drop bags! 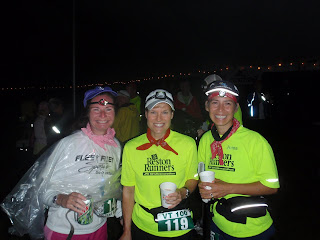 The girls from Reston Runners: Me, Mary K and Anna. We spent quite a bit of the first 30 miles together but then I lost both of them during my first time consuming shoe change.
In reality I should have skipped this shoe change because almost immediately following it I stepped in a mud-pit and soiled my shoe! 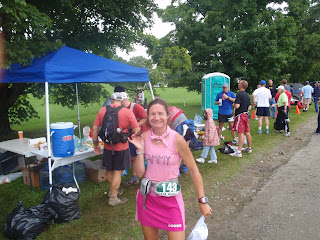 Food is my friend, so here I am with a freshly baked brownie!!! The home made goods all along the course was so tasty and yummy and since I throw caution to the wind when doing ultra's I was devouring every treat in sight. This still does not beat the minty cupcakes with coconut at Margaritaville, but it is a close second.
In fact during the entire event there were lots of tasty home made treats including cobbler, cookies, cupcakes, whole grain bread, salads.... I was really glad I was running a 100 miler and expected to burn of all the calories!