An Awesome Time at Arizona Marathon 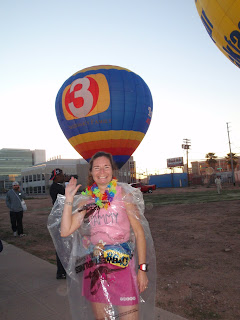 A hot air balloon ride certainly would make the 26.2 mile journey easier...in fact I ran over to the balloon, got a closer picture, then asked if I could hop a ride. The first answer was "No". Then I mentioned I had a credit card with a rather high limit and the answer became "I am sure we could arrange something". But alas I decided to get to the finish the hard way. Taking time to thank my cheering spectators. And of course eat a donut. I love large races as you can typically score alot of food along the way. I consider large marathons a 26.2 mile buffet meal complete with beverage service! 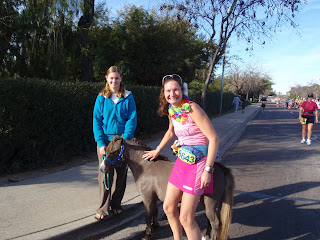 With a miniature horse along the course. Seriously I need one of these to carry me, my fanny pack (which has way too much stuff in it) or to just keep me company. It was a really sweet miniature horse that licked me at one point (I assume I tasted a bit salty) 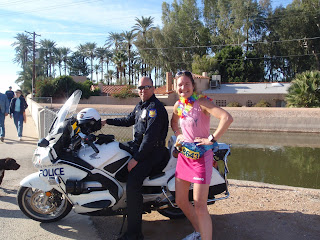 Wait a second officer, I was running only 5 mph...6 mph tops! 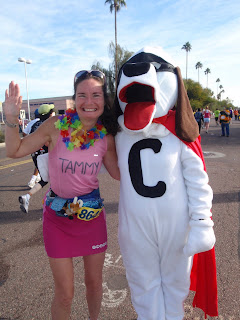 With wonderdog, the mascot of one of the school bands that was entertaining the runners along the course. This course had over 25 bands, many DJ's, lots of schools and many others who were supporting the runners. The Rock and Roll series is definitely a well supported and well organized race event management company. And the residents of Phoenix definitely supported the runners with lots of encouragement and cheers!

Today I redeemed myself a bit (after last weeks 7:00:55) I ran a sub 5 hour marathon. I have no idea of my specific time but suspect it was about 4:58 or so. I saw many friends, made many new friends and just had an amazing time!

The evening of the marathon, went to the headliner concert with my dad. I was very excited about it, but my dad less so. The concert was SmashMouth (think Shrek) and it was lots of FUN!
My marathon was really nice. I met so many new friends and saw all sorts of old friends. Larry Macon (on his about millionth marathon) was there as were several of my maniac friends: Rich, Jeff (?) and some others. At the finish line I ran into John "the Penguin" Bingham and he recognized me from our interactions during the 2007 Marine Corps Marathon. He is really nice. He (like I) was waiting for the final finishers to cheer them on. I have to say taking 7 hours (without rides) sounds like torture to me, so I really appreciate the effort the runners were putting forth!
The race was very well run, the temperature pretty nice (cold at the beginning but warmed up nicely and in the middle a cool breeze was just what runners needed). The aid stations were where the race management stated they would be with products they promised. And the course was relatively flat and had many spectators and bands along the side keeping up the energy.
Posted by Runner Tammy at 5:21 PM