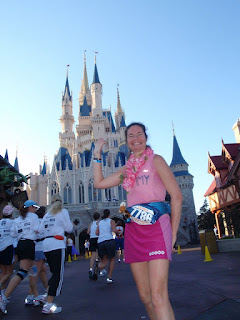 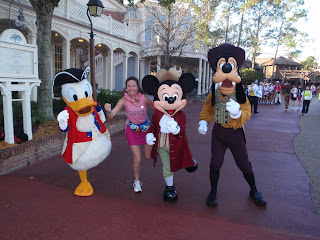 With Donald, Mickey and Goofy striking a runners pose in Frontierland 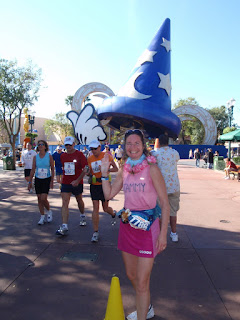 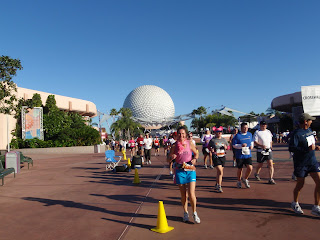 Running in EPCOT during the half marathon 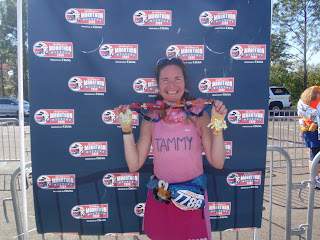 After the "Goofy" finish with my Mickey Mouse and Goofy Marathon Medals.

This past weekend I had my PW (personal worst) for both the half marathon and the marathon but I had the GREATEST time failing miserably. And now I have sucessfully set the bar really low for any future race this year.

My time for the marathon was 7:00:55 (55 seconds over the time limit of 7 hours!) and my half marathon was 3:25. But I made many new friends, took 350 and 650 pictures for the half and full marathon, respectively, went on two thrill rides, purchased a yummy pina colada and a yummy waffle treat. I don't think I could have packed my races with any more activities and by the end I was exhausted!
After the marathon was finished I ran into all sorts of people who recognized me as the "Girl who takes lots of pictures". I was questioned about all sorts of things including: how many pictures of motivational signs I took (my guess was 40 or so, but in fact it was 63--which was tough because sometimes they alternated the side of the road they were on!), how many characters I took pictures of (my guess at the time was 25, but in fact it was 42), how many rides I took (2-Expedition Everest and Tower of Terror) and what I purchased (a keepsake picture from Tower of Terror, a ponytail holder, a drink, and a tasty treat). My best mile was just under 9 minutes and my most jam packed mile was over 53 minutes.
I had an amazing time and have already signed up for next years race.
Posted by Runner Tammy at 2:47 PM

Labels: Pictures and a brief summary of my Disney Goofy 2009

Way to go ! Next year will be even better. See you there !

I too did the Goofy challenge.I ran the 1/2 with my son and let him set the pace. We took pictures along the way. But you were shopping, going on rides, pictures. You are an inspiration. Running should be FUN as well as fitness. NExt year I will be more like you!!!

Have you signed up already? I registered on Monday, so now I am committed for another year (or is it I should be committed for the next year?)

It is really neat that you ran the race with your son. I am sure you created many memories. I really do have an amazing time in all my marathons but I find Disney particularly fun. The cast members will let you go on the rides (and some will even give you fast passes!). And the food in EPCOT is amazing. Last year my sister and husband both had a beer stop at Germany in EPCOT. Since I like "girly" drinks, the Yacht Club Bar is my frosty beverage stop.

See you next year!
Tammy