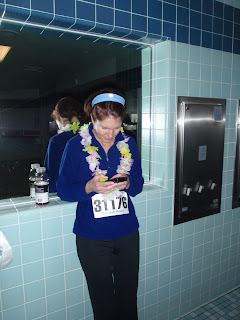 Cindy pre-race texting. Perhaps she was trying to e-bay her race number since she had not really trained for this event because of a foot surgery in Sept. (note: for those of you who are observant, yes this is a bathroom...it was cold so we were lurking in the bathroom to stay warm). I REALLY love real bathrooms before, during and after events. The climate controlled-ness, the running water and the ambiance is the best:-) 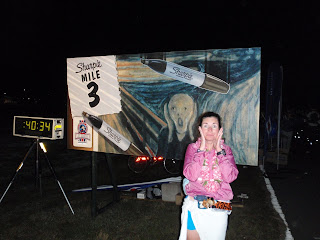 Mile 3 in 40 minutes...this is a disaster, what am I doing going so quickly?? 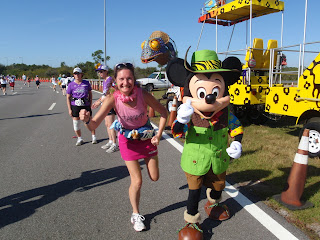 Mickey and I striking a runner's pose at mile 18 or so during the marathon. Over the course of the marathon, I got pictures of Mickey in various outfits. I think he might have been cutting the course and/or using mass transit along the course! 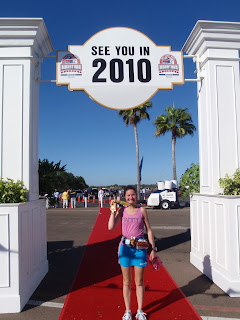 Yes, you will see me in 2010 because I have already signed up for the "Goofy". Now all I need to do is arrange my flight, hotel and purchase a larger memory stick for my trusty Olympus 1030SW Camera! Or maybe I just need to get another camera so I can seamlessly transition from one to the other when the memory stick becomes full or the battery needs to be replaced. 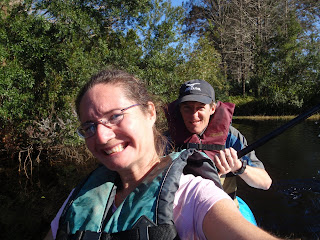 After the half marathon Tristan and I went to Port Orleans/Riverside for some tasty treats (beignets from Port Orleans) and some recreation (Kayaking at Riverside). You will notice I was smart and suggested a double Kayak. And of course my job became official photographer, not paddler. Anyway I am doing Tristan a favor by assisting in his upper body workout. He'll thank me in June when he is climbing Mt. Rainier and he is the strongest in the group! (BTW: I also say this when I pawn off items from my backpack on him or make him carry my luggage:-)

This past week it has been a bit tough for me to speak (but luckily I have been able to). During the half marathon, full marathon and even the day before the event I spent a significant amount of time shrieking like a girl (I think I could be an actress in a horror movie but I would get away because I can shriek so loudly!). I do this anytime I am on a thrill ride.
During my races I spent a significant amount of time talking and hooting and hollering (using my outside voice I might add!). By the time I arrived at work monday I could barely speak above a whisper. Oddly enough my co-workers thought I was sick. But I had to explain in my hoarse voice was self-inflicted by too many "wahoo's" and lots of cheering. Although in my mind you cannot have too many "wahoo's"! In fact I had a bunch of co-workers saying "I hope you feel better" In fact I was hopped up on endorphins and could not feel better then I did. I suppose I was a little tired because for 3 days straight I had gotten up prior to 4 a.m. (Fri, I volunteered at thd 5 km race and had to get up by 4 a.m., Sat & Sun I had to get up about 3 a.m. to get to the "Goofy" Marathon). Then Sunday night we did not arrive home until about Midnight.
I still have a bit of hoarseness and wonder if I will be able to sufficiently hoot and hollar at the Arizona Rock and Roll Marathon this Sunday.
I am getting excited about this trip. I will be meeting up with my dad to celebrate his 70th birthday (which is a bit later in Jan, but it's not everyday a 4 day weekend occurs). I hope to show him how much fun marathons are as well as how kind the other runners are. I think he is planning to go the EXPO (which I am volunteering at) and will be able to feel the energy of a marathon. Maybe he will get inspired to run a marathon in the future. And of course since this is a Rock n Roll Marathon, we get to go to a headliner concert Sunday night. I've never been to a rock concert with my dad, so this could be an interesting experience.
Posted by Runner Tammy at 2:19 AM

Wow, you do live life to the fullest. I have learned this new genre of photography pose from you, the one legged runners pose; I'll have to practice. I have run a marathon each with my two kids, now 22(Chicago), and 24(he ran Disney). We are vowing to come in 2012 for Goofy,(that Saturday will be my birthday). Keep the photos coming as we are living vicariously...Tom

Nice to e-meet you.

It is really neat that you have run marathons with both of your children. I am trying hard to convince my dad to run a marathon with me; but so far not luck. Maybe at this weekends Rock n Roll Marathon in Arizona he will feel the energy and excitement of marathons.

The Goofy Marathon is a really fun event and very manageable. And now you have three years to form a strategy (I highly recommend a side trip to ride Expedition Everest and Tower of Terror).