Friends and Stories from Disney Marathon 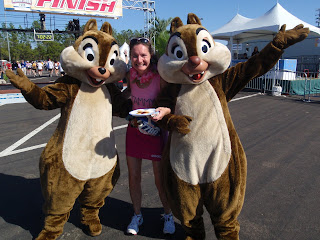 With my friends Chip and Dale right before the finish of the Marathon. This was right before Dale tried to steal my waffle treat. I now refer to this as the "Waffle Incident". I had this picture taken and asked the critters to strike a runners pose for a second picture (little did I know I was in overtime, doh!).

Apparently Chipmunks do not have good hearing so Dale (Chimpmunk on my right), turns towards me and faces sort of down to see what pose I wanted (guess they don't have good peripheral vision either). In doing this, he ends up almost shoving his face in my waffle treat. At this time I was becoming visibly alarmed (I love critters, but stealing my treats gets them on my short list). At the last second he turned away and did not smush his entire face into my treat. But he did glance my waffle treat getting a bit of powdered sugar on his face. The photographer then suggested I put my dessert off to the side, which I did. I think the five second rule applies to slight dessert smushing on a critters face thus after I crossed the finish line, I ate the remainder of my tasty treat...and it was so good! 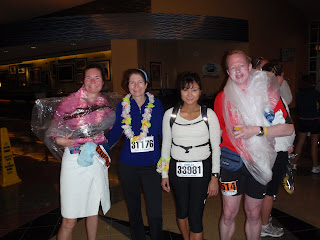 With Cindy, Imelda and Pete before the start of the half marathon. Notice the comparison between experienced Disney Marathoners (Pete and I) versus less experienced Disney runners (Cindy and Imelda)-we are prepared for the long cold walk to the start line and are sporting "hefty coutourre". In my case, I actually re-used the same Southwest Bag Sunday because I like to be green and realistically it was not too hard to attach to my fanny pack with a bandana (which I am a huge fan of) 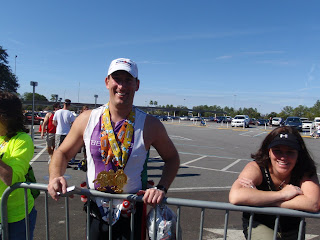 My new friend Rich at the finish line waiting for me to cross the finish line. We ran about 7 miles of the half marathon together and "bonded" then we met up with each other briefly during the marathon. At that time I predicted my time to be 6:59 and 59 seconds. Guess I was off by 56 seconds! Rich was a weatherman on Long Island and had done the Lake Placid Ironman while I was doing the Vermont 100. How awesome is that? 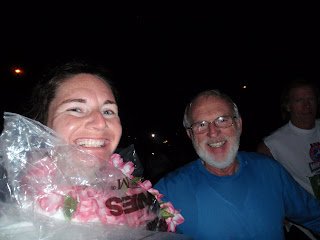 At the beginning of the marathon I ran across Joe C. Out of 20,000+ people it was pretty shocking to stumble across a friend within the first mile of the race (when it was REALLY crowded). I guess we are sort of stalking each other. Although I think for the next several months we may not run into each other. I am signed up for Niagara Ultra and have arranged my hotel, air and rental car, so I know we'll see each other in June at the Niagara Ultra 50 km (or 60 km for me!) 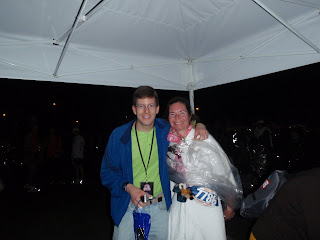 With my friend Mike LoPresti from the 24 hour race and Umstead 100 prior to the marathon. It was so great to see him at both the EXPO and right before the marathon start at the CIGNA tent. He is so nice and encouraging. He beat me by about 5 hours during our first Umstead in 2007, but he has subsequently run into some health issues preventing him from running ultra's which is very sad. He did run the half marathon and did very well (sub-2 hours by alot!)
Posted by Runner Tammy at 5:47 PM

Great Stuff, I am updating my website this week, I am missing a few races.
Nice to meet you, we have 2 marathons here on LI, they are both kinda boring.