One New Years Resolution Down: Many to go 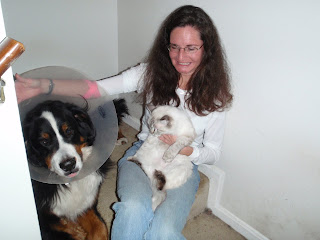 With our random wounds from the past two weeks (Gilligan with his e-collar, me with my cool pink compression bandage and puffi with her belly) 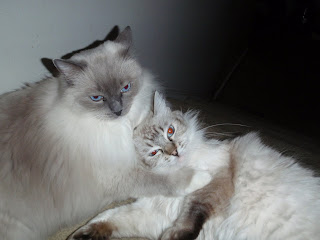 Boo holding puffi (or is he strangling her??) 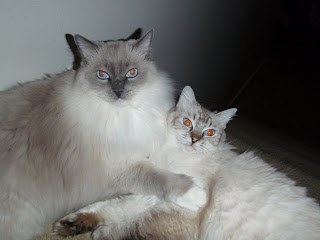 Boo and puffi hanging out

Today I started my day with about an hour or so at work. At about 7 a.m. I headed off to the blood donation site where I had an appointment. After an uneventful screening (well except for a very painful needle stick to assess iron levels), I jettisoned 1 lb of fluid (I think that is what 1 pint weighs). I got a cute compression bandage (hot pink, what else is there?) and a consolation orange juice or 4! Of course I gobbled up two packages of pretzels and chatted with the workers (who were bummed about working on what most companies had given as a Holiday). I felt their pain as I was stuck working as well. After applying my sticker "Be nice to me I donated Blood", I said, "Thanks and Happy New Year".

During my ~1 hour in the donation center, I saw only 2 other people and about 10 staff members. Everyone was really nice and attentive. It seems it was a slow day when I was there. Perhaps it was the early hour, but perhaps it is because not many others had "donate blood" on their list of resolutions.

Sadly I lost my Blood Donation sticker pretty quickly. Initially it got stuck in my hair. It must have lost adhesive so when I stuck it to my shirt subsequently I lost it for good pretty quickly. After that no one had to be nice to me. It was kind of a bummer. Apparently I had alot of issues not dropping things and in fact lost the tiny bandaid on my finger. It had fallen somewhere in my office suite. I looked extensively for it and considered sending an apologetic e-mail stating a bandaid had been dropped but it was not a biohazard (hey my blood is good enough for the Red Cross, so it should be too alarming to see). Since there were only 3 people in my office I decided to hope it was stuck in my hair unbeknownst to me (that's my defense and I'm sticking with it!)

As I headed back from my blood donation I got my oil changed (I was a busy little beaver today). As I dropped the Jeep off I had a pretty amusing conversation with the salesperson below you can see some highlights.

Tammy: Can I get an oil change
Salesperson: Sure...what kind of oil do you want, cheapie, middle or super expensive (okay, the person did not use this phrasing exactly but this is the gist of it and I hate this question because I never know how to respond--if I say "cheapie" it means I am an irresponsible car driver but if I say expensive, it seems it is a frivolous expense and looks like I am flaunting my non-existant wealth... but this is Tristan's Jeep so I respond with)
Tammy: The cheap stuff. It's my husbands car (good tactic to explain the cheapness, right?)
Salesperson: Do you want to have your alignment tested? It's free today with an oil change.
Tammy: Well, if it's free sure you can do this but for sure I will not do anything because I hate this car. (seriously I think I was lightheaded because of my blood donation so I was not prescreening my comments in my mind).
Salesperson: (after chuckling then asking me several more questions I don't recall as vividly he asked) What year is your car? Is it a V6 engine?
Tammy: (aackk...I have no idea the response, this may be the car I drive but it was purchased by Tristan). Well, it was born in 2005. But I am not sure if it is V4 or V6. It gets really poor gas mileage of about 15-20 mpg. I think it is V6, but it's my husband car, stupid piece of junk. (seriously I was spewing out my dislike of the truck freely...if it was just a little warmer and lighter late in the day I would be jogging or biking to work)

I picked up the Jeep without incident in the afternoon. But I do wonder what might be written in the chart (I imagine is says: Lady despises Jeep--don't bother trying to sell extra cost options unless you want to hear about how the car is her arch nemisis!).

But alas my day was not done. When I returned home to an empty house I figured Tristan had taken the dogs for a walk. He had. But apparently mid-walk Gilligan dropped to the ground and started rolling around (he is ready for a fire on him because he has Stop, Drop, Roll down!). Well, his e-collar had started having issues yesterday but today it split in half. Gilligan was free to scratch his hotspot. And he did with wild abandon. I did not realize this was all transpiring but being a decent (good?) wife I started walking our typical loop backwards. Pretty quickly I ran into Tristan, Billy, Gillligan, some poop in a bag and the collar. It was fortunate I had gone out to meet Tristan because he did not have the situation under control. In fact even I don't think I would have had this situation under control. Well we all walked home with Tristan and I trying to discourage Gilligan from mis-using his new found freedom. We got home and called the Vet. They said they could see him and get us a new collar and a steriod shot (since he was clearly still itchy).

Here is a summary of our visit and a snippet of the conversation with the vet. We all pile into the car (which is fine because Gilligan thinks we are going for a ride, short hike or maybe Brusters for some ice cream) We get to the vet. Because of my blood donation I cannot help Tristan much (no heavy lifting is a clearly stated rule...although so is no vigorous activity for 24 hours, I think and the Al Rider 10 miler tommorrow is 24 hours and 10 minutes after my donation started!) Gilligan remains in the car and refuses to get out. Who can blame him. But this is not going to help his wound or the itching. Tristan opens both car doors, pushes, pulls, pushes then pulls again and even tries to lift Gilligan up and out. But he is not very sucessful at budging Gilligan. I give the play by play in the reception area. It totally cracks me. The staff is pretty amused. Gilligan puts up a valiant struggle. Afer about 10 minutes Tristan finally can be declared the victor and they come in the reception. In retrospect we all should have clapped and given him a big cheer. For a bit my money was on Gilligan!

Now comes the time when we explain how/why the e-collar failed. A summary of our story was: Gilligan is strong, he was really interested in itching his hot spot and actively tried to get his e-collar off. Of course left unsaid was...and we took him on a 8 hour hike in the wilds of the Shenandoah Mountains. Then we had to explain why his wound was so dirty/muddy (in fact this was more a function of todays rolling then scratching during the last part of his walk without the e-collar. I think at the Vets office we now have a note in the chart suggesting we clearly have no control over our dog based on the 1) Refusal to get out of the Car "incident" and 2) how dirty and a bit cut up he got in a brief period between the destruction of the e-collar and the vet visit. they have no idea Gilligan is one of the two critters in our household we have the most control over (which really speaks to the level of our incompetence, doesn't it?)

On a positive note at least I don't think I got a comment in my chart at the Blood Donation site (well at least this time!)
Posted by Runner Tammy at 2:47 PM

Labels: Blood Donation and car servicing and revisit to the Vet